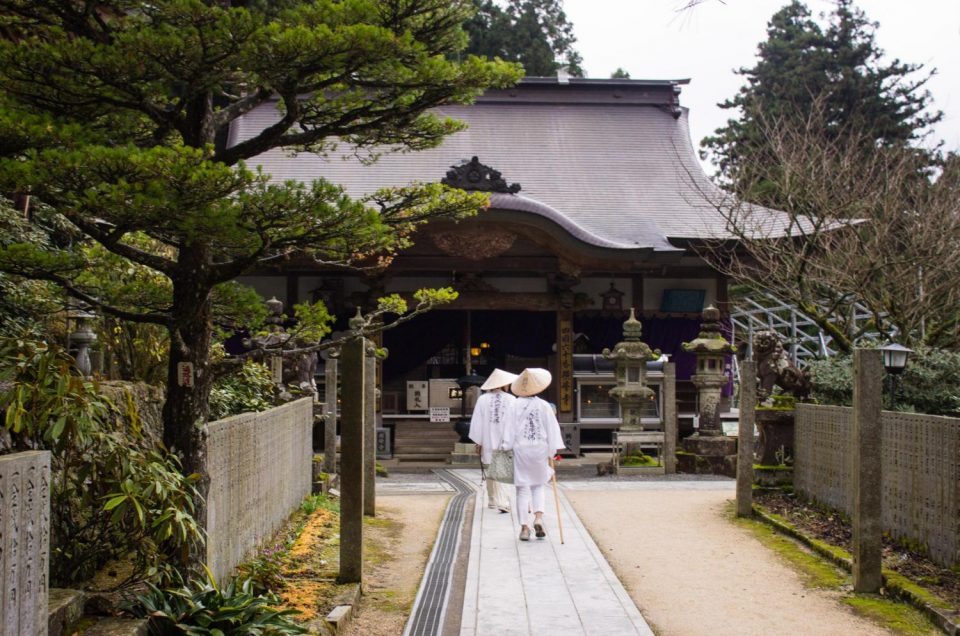 Also known as The Henry Pilgrimage Road, with a history dating back over 1,200 years, it was created by the monk Kūkai (774-835). This pilgrimage path, which includes 88 Buddhist temples spread over the four prefectures of the island of Shikoku, is receiving more and more attention as it is a quiet travel plan like very few in the world.

The purpose of the Henry pilgrimage is not merely religious; it also attracts young people looking to improve their health or want to visit places full of positive energy. In addition, more and more foreigners are traveling to Japan to walk the Shikoku pilgrimage path. For the inhabitants of the island, the route goes beyond the religious and constitutes an important part of the Japanese cultural heritage, which is why efforts are being made to have it included in its World Heritage List by UNESCO.

40 days on foot and a minimum distance of 1,130 kilometers

The route begins at Ryōzen-ji (Temple 1), in Tokushima Prefecture; It continues in the prefectures of Kōchi and Ehime and concludes in Ōkubo-ji (temple 88), in the prefecture of Kagawa. The journey has a minimum of 1,130 kilometers and is covered on foot in about 40 days, a dozen if it is done by bus or train.

Legend has it that Japan is home to about eight million deities; The Japanese archipelago abounds in a variety of pilgrimage routes compared to other countries: the cult of nature and ancestors coexist with religions such as Shintoism, Buddhism and Confucianism, among others. Of all the existing roads, the Shikoku brook stands out alongside the pilgrimage to the Ise Shinto shrine and the Kumano route.

However, the origins of the Shikoku pilgrimage route are uncertain. While some say that it was the Buddhist monk Kūkai (known as Kōbō-Daishi after his death) who initiated it, others say that it was Emon Saburō. According to a legend, this character, linked to Ishite-ji (temple 51), in the Ehime prefecture, began to travel the island in search of Kūkai to apologize to him for having denied alms to a traveling religious who, apparently, was the monk himself.

By the 17th century the Shikoku pilgrimage route had already become popular among the Japanese people. A guide on the trail by the Buddhist monk Yūben Shinnen, Shikoku henro michishirube, dates from this time, published in 1689. This book was a bestseller until the Meiji era (1868-1912) and earned its author the nickname of “father of the pilgrimage henro”, since in the work he specified which were the 88 temples of the route.

Another character linked to the Shikoku pilgrimage is the haiku poet Taneda Santōka (1882-1940), who compared the henro to life itself; Taneda completed the route twice.

Today some of the old paths of the henro route are still preserved.

Among the illustrious foreign pilgrims, the University of Chicago anthropologist Frederick Starr (1858-1933) stands out. He visited the 88 temples in 1921. At that time, Starr was known in Japan for his passion for the votive cards characteristic of holy places. Buddhists and Shintoists from all over the country.

In recent years, it stands out, for example, the passage through the route of the Spanish ambassador to Japan, Miguel Ángel Navarro Portera, who was in November 2013 in the city of Matsuyama, in the Ehime prefecture, on the occasion of the fourth centenary of diplomatic relations between both countries. That Spain has its own World Heritage pilgrimage route, the Camino de Santiago, motivated the visit.

A journey to find yourself

The origin of the name henro to refer to the pilgrimage of Shikoku has its explanation in that this island is located in a remote area of ​​the Japanese archipelago; In ancient times, the word hendo (“remote place” in Japanese) was used when talking about this type of enclaves, a word that would have derived from the term henro. Regardless of its remoteness, there are many Japanese who in different periods of history have traveled the 88 temples on the route and have seen this long journey as an opportunity to find a new life.

The pilgrims forget about obligations such as family, social class, position and property, and they dedicate themselves to making the journey, which is why the pilgrimage has become a journey in which people are formed and they find themselves. As a general rule, the journey is made individually, although the conical sedge hat that the pilgrims wear has an inscription that alludes to the fact that Kūkai always accompanies them.

Conical sedge hat typical of pilgrims with inscriptions on Kūkai.

Those who make the pilgrimage are known as henro-san. During the pilgrimage, the normal thing is to be dressed completely in white and to wear a conical sedge hat that protects both from the rain and the sun, although this does not mean that there is a regulated clothing. These days, items related to the Shikoku pilgrimage can be bought cheaply, so it’s easy to put yourself in the shoes of a ‘real’ pilgrim.

On the left, a mannequin dressed as a pilgrim. He wears a conical sedge hat (1), white clothing (2), a wooden stick (3) and a cloth bag (4). On the right, items for the pilgrimage for sale at Ryōzen-ji (temple 1).

In the past, there were not a few pilgrims who died during the route. For this reason, travelers always wore white, a color that is associated with the idea that we are all equal before Buddha.

Another important aspect of the henro pilgrimage is to offer food and a resting place to the pilgrims. In the business world, when gifts are given, a return is always expected; however, on Shikoku, offerings are never rewarded. It could be said that the concept of kindness and hospitality characteristic of Japan has its origin in this behavior, although it is selfless acts with which a feeling of gratitude is transmitted to Kūkai. The expression nisehenro, “false henro”, is used to disparage those who do not make the pilgrimage path and whose sole purpose is to be entertained.

The interest generated abroad by the Shikoku pilgrimage is greater than expected, and more and more tourists from other countries are traveling to Japan to walk the Henry Road.

Sen Guesthouse, in Matsuyama City, Ehime Prefecture, assists foreign tourists who wish to do the pilgrimage route. It is run by a Japanese-American couple: Matthew and Noriko Iannarone, aged 35 and 37, respectively. Since it opened its doors approximately two years ago, some five thousand people have passed through; half of them were foreign visitors, mainly from western countries such as France, Germany, the Netherlands and the United States.

Matthew and Noriko Iannarone pose smiling at the reception of the accommodation they run.

While doing the Camino de Santiago in Spain, Matthew met a Japanese pilgrim; he told him about the pilgrimage route of Shikoku. Later, the American traveled to Japan, where he made the tour of the 88 temples in 40 days. When asked about the differences between the two pilgrimages, he explains the following:

“The Henro road is circular, while the Santiago road is straight. In Spain I had a good time drinking wine every day; however, the route in Japan was tough. It has mountains and valleys, so it gets difficult and you really get tired. However, it is a very religious experience and awakens particular and deep feelings. ”

A native of Texas, Matthew majored in Anthropology in college and spent about three years in South Korea before coming to Japan. “Believing in Shinto and Buddhism at the same time is weird, but I find it interesting. I consider that it is something unique in the world. It is incredible that the teachings of Kūkai continue to be transmitted to this day through the henro path, and that this culture is still preserved, ”he explains when talking about the view of the Japanese regarding religion.

A strong interest in Japanese culture and religion

According to Matthew, what really interests in the West is Zen, the Shingon, a Buddhist sect to which Kūkai belonged, is hardly known. However, his wife Noriko explains the following:

“We receive more visitors directly from other countries than foreigners living in Japan; We also have clients who used to live here. ”

In addition, “there are many foreigners who want to deepen their knowledge of Japanese culture and religion,” he says. In two years, the number of foreigners who have used their services not only rises to about 2,500 people, but also states that “there have been hardly any problems”, and that most of them go directly to their establishment after consulting websites such as Rakuten and Lonely Planet, the latter specialized in travel.

At the accommodation, they explain to tourists the manner and manners of the pilgrimage, as well as the Buddhist sutra Hannya Shingyō, which pilgrims often recite along the way. The establishment has seven rooms; the cheapest singles cost 4,500 yen, and the doubles cost 7,000 yen. As a general rule, guests usually stay two days and three nights, although the maximum stay can exceed a month and a half.

Popularity with young people interested in history and energetic places

The Shikoku pilgrimage route also attracts young people who want to improve their health or are interested in visiting places full of energy or historical character. “Starting from scratch”, “Finding oneself” or “Curing oneself” are expressions that are associated with the henro pilgrimage.

For example, Kōnomine-ji (temple 27) is known for its waters: they say that thanks to them a woman suffering from a serious illness escaped death. In addition, it is famous for being the temple to which the mother of Iwasaki Yatarō, founder of Mitsubishi Zaibatsu, went daily, who prayed there for her son.

Unpen-ji (Temple 66) is popular with women for its distinctive bronze wish-making bench, which is shaped like an eggplant. The origin of it results from a play on words with the term nasu, “eggplant” in Japanese, and the verb nasu, which is written with another Chinese character and would come to mean “fulfilled.” The famed Zentsū-ji (Temple 75) hosts a ceremony every June in which offerings of sanuki udon noodles are made, a variety that apparently came from China from the hand of the monk Kūkai.

Regarding historical facts, Ishite-ji (temple 51) is related to the beginning of the Henro pilgrimage. In this sense, Sankaku-ji (temple 65) also stands out, a place where the haiku poet Kobayashi Issa (1763-1828) went to pray for an uncomplicated delivery for his wife; Mandara-ji (temple 72) is also known, where the poet Saigyō Hōshi built a hut in which he lived for about seven years. In front of the main room of this temple there is still a flat stone on which the writer used to take a nap.

The Shikoku pilgrimage route
Open Chat
Powered by
Hi, talk with us