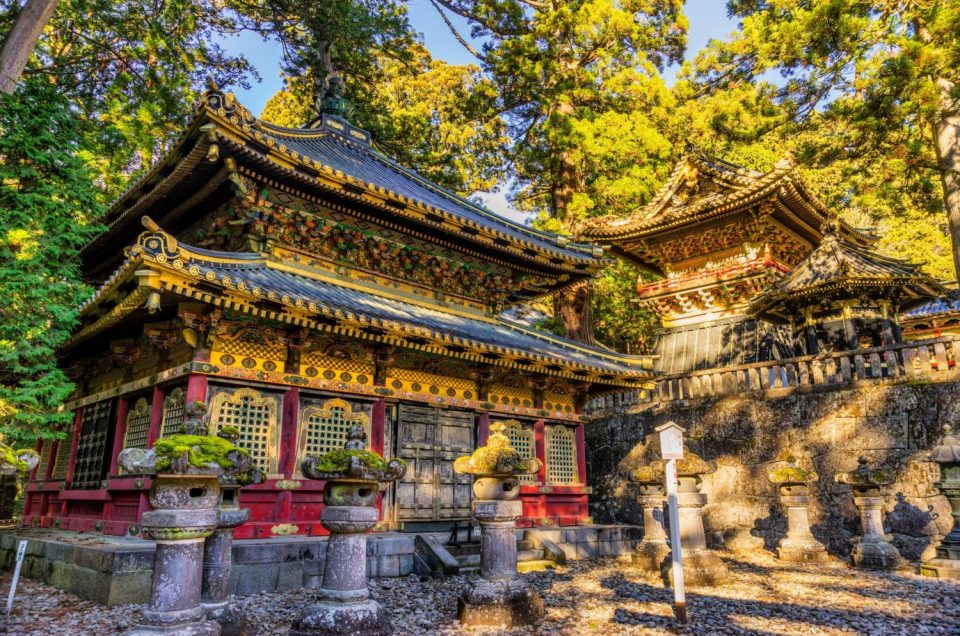 Religion in Japan is a wonderful hodgepodge of ideas from Shinto and Buddhism. Unlike in the West, religion in Japan is rarely preached, and it is not a doctrine. Instead, it is a moral code, a way of life, almost indistinguishable from Japanese social and cultural values.

Japanese religion is also a private and family affair. It is separate from the state; there are no religious prayers or symbols at a school graduation ceremony, for example. Religion is rarely discussed in everyday life and most Japanese do not worship regularly or claim to be religious.

However, most people resort to religious rituals at birth, marriage, and death, and participate in spiritual matsuri (or festivals) throughout the year.

Religion and the emperor

Until World War II, Japanese religion centered around the figure of the Emperor as a living God. The subjects saw themselves as part of a large family of which all Japanese were members.

However, the crushing defeat of the war shattered the beliefs of many people, as the Emperor’s fragile voice was transmitted to the nation renouncing their deity. The period since then has seen a secularization of Japanese society almost as dramatic as the economic miracle that saw Japan’s postwar economy go into overdrive.

However, much of the ritual has survived the collapse of religious beliefs. Today, religion defines Japanese identity more than spirituality, and helps strengthen family and community ties.

Shintoism is the indigenous spirituality of Japan. Every living thing in nature (eg trees, rocks, flowers, animals, even sounds) is believed to contain kami or gods.

Consequently, Shinto principles can be seen throughout Japanese culture, where nature and the changing of the seasons are appreciated. This is reflected in arts such as ikebana (flower arrangements) and bonsai, Japanese garden design, and the annual celebration of sakura or cherry blossom.

Shintoism only got its name when Buddhism came to Japan through China, Tibet, Vietnam, and ultimately Korea. Buddhism arrived in the 6th century and settled in Nara. Over time, Buddhism split into several sects, the most popular being Zen Buddhism.

In essence, Shintoism is the spirituality of this world and this life, while Buddhism is concerned with the soul and the afterlife. This explains why for the Japanese the two religions exist so successfully together, without contradiction. To celebrate a birth or marriage, or pray for a good harvest, the Japanese turn to Shinto. Funerals, on the other hand, are usually Buddhist ceremonies. Shrines versus temples As a general rule, shrines are Shinto and temples are Buddhist.

The shrines can be identified by the huge entrance gate or torii, often painted vermilion red. However, you will often find shrines and temple buildings in the same complex, so it is sometimes difficult to identify and separate them.

To appreciate a shrine, do what the Japanese do. Just inside the red torii gate you will find a water fountain or a waterhole. Here you must use a bamboo ladle to wash your hands and mouth to purify your spirit before entering.

Next, look for a long, thick rope that hangs from a bell in front of an altar. Here you can pray: first ring the bell, throw a coin in front of the altar as an offering (five yen coins are considered lucky), clap your hands three times to invoke the kami, and then put your hands together to pray.

In a temple, you will need to remove your shoes before entering the main building and kneel on the tatami floor, before an altar or icon to pray.

Luck, fate, and superstition are important to the Japanese. Many people buy small charms in temples or shrines, which are then attached to handbags, key chains, mobile phones, or hung on cars to bring good luck. Different charms grant different luck, such as test success or fertility.

Prayers are often written on votive tablets – wooden tablets called ema that are hung for hundreds of them around the temple grounds. At famous temples like the Kiyomizu-dera in Kyoto, you will see votive tablets written in a variety of languages.

One final way to learn your destiny is to take a slip of fortune. Sometimes available in English, a slip of fortune rates your future in different areas: success, money, love, marriage, travel, and more. If your fortune is poor, tie your token to a tree branch in the temple; Leaving the slip on the temple should improve your luck.

The most important times of the year in the Japanese calendar are the New Year, celebrated from January 1 to 3, and O-Bon, which is generally celebrated around August 16. On New Years, the Japanese make trips to ancestral graves to pray for deceased relatives. The first visit to the New Year’s shrine is also important to ensure luck for the coming year.

In O-Bon it is believed that the spirits of the ancestors come down to earth to visit the living. Unlike Halloween, these spooky spirits are welcome and the Japanese visit family graves.

Births are celebrated by family visits to shrines. The passage of childhood is commemorated in three key ages: three, five and seven years, and young children are dressed in expensive kimonos and taken to certain shrines such as the Meiji Shrine in Tokyo. Coming of age is officially celebrated at 20. At the beginning of January, coming of age ceremonies (such as graduations) are held in town halls, followed by temple visits by young people proudly dressed in glittering kimono.

In Japan today, marriage ceremonies are a great clash of East and West. A Japanese wedding can have several parts, including a Shinto ceremony in traditional dress at a shrine, as well as a Western-style wedding reception at a hotel or restaurant. In the second part, it is now popular for a bride to wear a wedding dress for a howaito wedingu (white wedding).

Funerals are supervised by Buddhist priests. 99% of the Japanese are cremated and their ashes buried under a tombstone. To better understand Japanese funerals, OnlyOne Travel highly recommends the Oscar-winning film Okuribito, or Departures, about a concert by a cellist who returns to his roots in Yamagata and rethinks as an undertaker.

Japanese matsuri are festivals connected to shrines. In a tradition that dates back centuries, matsuri parades and rituals relate to the cultivation of rice and the spiritual well-being of the local community.

According to Article 20 of the Japanese Constitution, Japan grants full religious freedom, allowing the practice of minority religions such as Christianity, Islam, Hinduism, and Sikhism. These religions represent approximately 5-10% of the population of Japan. However, the spiritual void left by the Emperor’s resignation was also quickly filled by a plethora of new religions (shin shukyo) that emerged across Japan.

Mainly concentrated in urban areas, these religions offered these worldly benefits such as good health, wealth, and good luck. Many had charismatic, Christlike leaders who inspired fanatical devotion in their followers. It is here that the roots of such famous “cults” can be found as the “aum cult of divine truth”, which perpetrated the gas attack on the Tokyo subway in 1995.

However, the vast majority of new religions focus on peace and the achievement of happiness, although many Japanese who are not involved seem to distrust such organizations. Tax evasion or money laundering are, according to some, best for the course.

Some of the newer religions, such as PL Kyoden (Public Liberty Kyoden) and Soka Gakkai, have become a very important part of the establishment in Japan, and it seems that their role in politics and business should not be underestimated.

For those who have an interest in Buddhism or Shintoism, Japan is full of fascinating places to visit. Nara in the Kansai region near Osaka is believed to be the original home of Buddhism in Japan and features an extensive museum of Buddhist art and artifacts, as well as the massive Buddha statue that is the main attraction for visitors. of Nara.

Kyoto is full of beautiful shrines and temples and can provide a unique look back through history to a time when religious beliefs were a more important part of everyday life, as well as being simply stunning to behold. In fact, wherever you go in Japan, you will see the face of the country’s religious heritage.