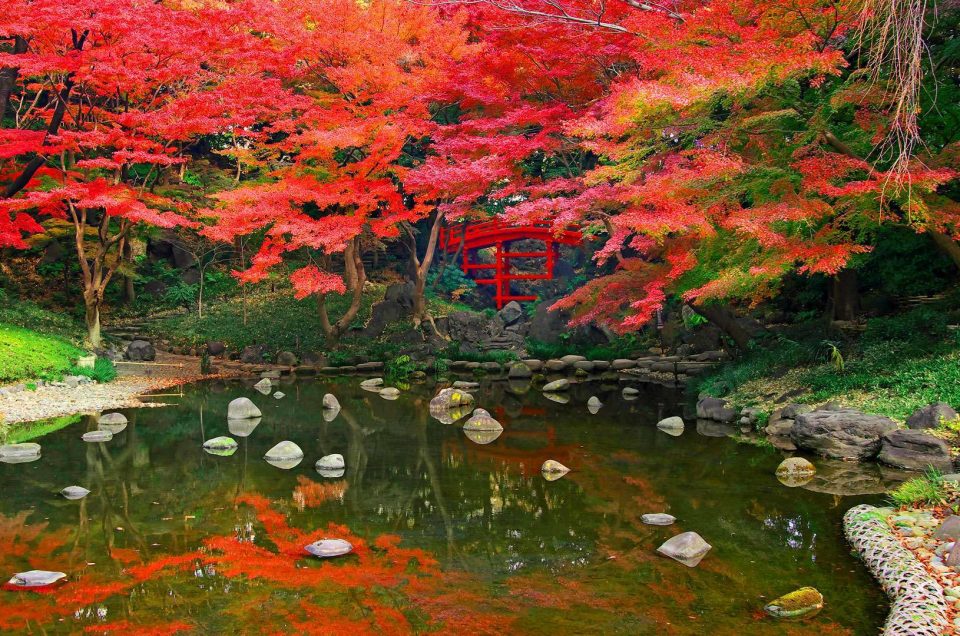 The three great gardens of Japan are Kenrokuen, Korakuen, and Kairakuen. Kenrokuen are located in Kanazawa and used to be the outer garden of Kanazawa Castle. Kairakuen is located in Mito, not far from Tokyo, and boasts over three thousand plum trees, while Korakuen is in Okayama and is notable for its spacious gardens, an unusual feature for a Japanese garden.

“Borrowed Landscape” is a technique in East Asian landscape gardening whereby the garden is willing to make use of its surroundings to enhance its own characteristics. This could mean incorporating nearby hills, mountains, lakes, forests, or even buildings (usually a castle) to make the garden appear more spacious and impressive.

Kare sansui are dry rock gardens associated with the soul of Buddhism. Typically, a kare sansui garden will consist of several judiciously placed rocks (representing islands) in the middle of a “sea” of raked white gravel. These gardens are designed for inspired meditation, the most famous example being Ryoan-ji in Kyoto.

Above all, Japanese gardens demonstrate the Buddhist influences that were brought to Japan in 612; Ono-no-Imoko, an emissary from Japan who visited China and was able to absorb enough of the Buddhist way of life to recreate it once he returned home. At this time, gardens in Japan were created solely as religious representations of various beliefs, establishing a comfortable common ground with Chinese Buddhists.

Every element of a Buddhist garden explodes with religious significance; the paths lead to enlightenment, while the ground represents the fertility and protective nature of the Buddha mind. However, while some of the Buddhist ideas were adopted in Japan, it was not at the expense of the ancient Japanese religion, Shintoism.

It has always been firmly believed that the two religions, Shintoism and Buddhism, can coexist in harmony; Instead of separating, the two religious intertwine. This fusion of religion has been widely demonstrated in Japanese culture; reflected within the fundamental design of Japanese gardens.

Other influences infused Japan in 1192 with the arrival of Eisai, a Buddhist monk from China. Eisai introduced the “Chan” or “Zen” form of teaching in Japan, as well as the tea ceremony, a ritual based on the preparation and presentation of a powdered green tea (matcha).

Between 1333 and 1573, Zen monks promoted the tea ceremony to such an extent that the ritual was sewn into the cultural fabric of Japan and has remained inherently central to Japanese culture ever since. Before long, chaniwa gardens (those designed specifically for tea ceremonies) began to flourish throughout the Japanese landscape, giving a compelling indication of how respected the ceremonies became.

However, the most significant impact of the tea ceremony on Japanese garden design occurred between 1568 and 1600 (known as the Azuchi-Momoyama period) in which the tea ceremony pavilions began to stand out as popular features of the yard; Lanterns, steps and arched bridges were increasingly fashionable in these new gardens, which are now considered the iconic objects of Japanese gardens.

As a result, these characteristics became intrinsic to Japanese garden design, and thus the religious importance that once accompanied the creation of Japanese gardens was lost to accommodate those who wished to use them for alternative hobbies, or simply to enjoy a meditative environment. .

Further development occurred between 1603 and 1867 (the Edo period) when the “wandering” garden was established. These gardens were created primarily to satisfy the aristocracy of Japan by providing space for leisure and amusement for its wealthier classes.
}
Promenade gardens, usually built on the property of an aristocrat, were much more personal settings; designers would reconstruct landscapes taken from the owner’s personal experiences, or even recreate some of the world’s most iconic landmarks.

The Edo period of Japanese history is famous for its feudal system, in which shogun leaders (military commanders) would rule various areas of the Japanese landscape. Shogun men were rewarded with lands for their loyalty, especially in the case of samurai warriors, so the gardens were often used to demonstrate the individual and unique styles of each samurai leader. Incorporation into the political world forced the gardens to integrate into the mainstream of Japanese politics.

Beyond the Edo period

Indeed, as the exuberance and glamor that accompanied Japanese garden styles began to experience the credit they deserved, businessmen and politicians were expected to prove their success not only by the luxury of their homes, but also by the majesty of its gardens. In fact, as the power of the Emperor was waning in Japan, the power of industrial man began to flourish, and along with them the gardens rose to a much more significant status.

During 1926 and 1989, the Showa period, Japan became the first East Asian country to industrialize. As the country became more susceptible to modern influences, Western designers were so eager to experiment with the more unusual Eastern designs.

Thus, the cultural fusion that has always dominated Japanese garden design reached its climax; the modern western world permeated the Orient, and Japanese gardens lost the consecrated status they once had, and were reborn as primarily commercial settings.

Japanese gardens
Open Chat
Powered by
Hi, talk with us