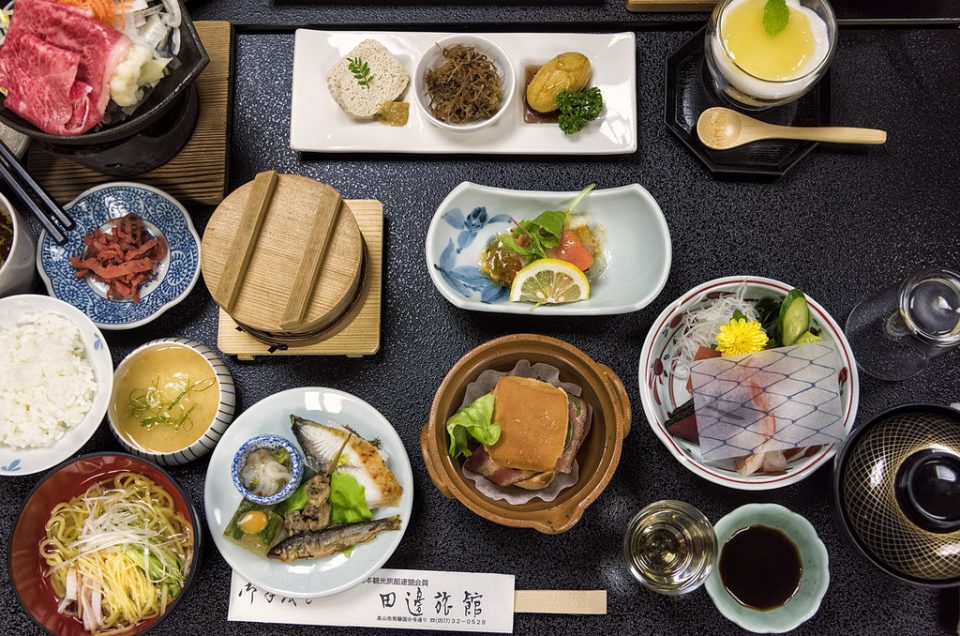 Much more than just sushi!

When it comes to food, the Japanese are among the most enthusiastic and passionate of any race. Ask any Japanese person about a recent trip within Japan and the conversation almost always includes talking about local food. In fact, for many Japanese who travel outside their places of origin, food is often one of the main reasons for traveling.

For this reason, many towns and cities in Japan are mostly known for their local specialty, be it a type of sweet, fish, noodles, seaweed or tofu, etc. Such is the Japanese passion for food that you can turn on your television at almost any time of the day or night and you will almost certainly find a show about food.

Careful preparation and meticulous presentation are crucial elements of Japanese cuisine. Food is an art form and even the simplest dishes are often prepared by chefs trained for many years.

Once marketed as currency, rice has been a staple food for the Japanese for over 2,000 years and still accompanies or forms the basis of many meals.

Harvesting rice is labor intensive and the Japanese remember this from a very young age, which is why rice is rarely wasted and leftover rice is used.

Japan is very proud of its four very distinctive weather seasons and each season ushers in more delicious offerings. This is most evident in supermarkets, hotels and inns and restaurants where menus are frequently changed to reflect what is available and what is in season.

In fact, there is such a diverse range of foods that it is not an exaggeration to say that many Japanese find it difficult to name (for example) all the myriad varieties of seaweed, mushrooms, and fish on the shelves of their local grocery store.

Kaiseki cuisine (kaiseki ryori) are small dishes that contain up to 12 delicious steamed, simmered or grilled dishes, slices of raw fish sashimi, tempura, soup, rice, pickles and a small dessert. Dishes generally reflect what is available and in season. Kyoto is a great place to enjoy this wonderful gift in every way.

Thanks to the wide variety of regional specialties (known as meibutsu in Japanese), there is no shortage of restaurants dedicated to proudly serving local dishes.

One of the best known regional dishes is okonomiyaki (a type of savory pancake) famous in Hiroshima and Osaka. A trip to Hiroshima is not complete without visiting Okonomimura (okonomiyaki village) where watching chefs prepare food is as much fun as trying this unique regional delicacy.

It’s fair to say that fish is an integral part of the Japanese diet. Whether it is eaten almost live (odorigui – still dancing!) Raw (nama or sashimi), grilled (yaki) or fried (tempura), it seems that the Japanese have tried every possible preparation method.

The wide variety of fish on offer is simply amazing. If you’re a fish lover, then a trip to the Tsukiji Fish Market (the world’s largest wholesale fish and seafood market) is a must for an early morning breakfast of some of the world’s freshest sushi. For those who don’t like the sound of a fish breakfast in the early hours, there are many conveyor belt sushi restaurants (kaiten zushi) throughout Japan.

Meat and other food products

Of course, the food supply in Japan extends to much more than just fish. Japan has a wide variety of fruits and vegetables, a plethora of noodle dishes (including a plate served over ice!), And some of the best pastry shops outside of France (some say they are the best in the world, although the French can dispute this!)

Kobe, with its wonderful variety of coffees, is the ideal place for a sweet tooth. Kobe beef, a world famous delicacy, is produced from cows raised according to strict tradition and provides a wonderful melt-in-your-mouth taste. However, be prepared to put an arm and a leg out for a real Kobe steak in a good restaurant.

Vegetarians If everything so far sounds a bit meat and fish oriented, don’t be alarmed: there are plenty of vegetarian options in Japan. In fact, eating meat was forbidden in Japan for over a thousand years before 1868!

Try the wonderful zaru soba (buckwheat noodles served cold with a sauce), a bowl of udon (thicker noodles) in a mountain vegetable soup, tofu steak or okonomiyaki. If you’re feeling adventurous you could try natto, a sticky and slightly stinky concoction made from fermented soybeans. The Japanese liken it to marmite: you’ll either love it or hate it.

Eating out Eating in Japan is as much about the experience as it is about the food. Many Japanese restaurants specialize in a particular type of food and there are countless different styles, including the famous kaiten-sushi restaurants, which are now gaining more popularity in the west.

Others include restaurants that specialize in kabobs (kushiyaki), ramen (noodles in a broth), tempura (fried fish or vegetables), cooking your own Korean-style barbecue (usually with a hot plate on the table), teriyaki (meat / chicken / fish marinated on a hot plate), sukiyaki (thin slices of beef, bean curd and vegetables cooked in soy sauce and then dipped in egg) etc. The list goes on.

Don’t discount the festival food, which offers a wide variety of interesting foods, such as takoyaki (small pieces of octopus cooked in bread dough), kakigori (shaved ice), and okonomiyaki, to name a few.

If you want a more general selection, then the best place to go is an izakaya (Japanese pub) where you will find a large and fairly inexpensive selection of food and drink. Izakaya often offers tabehodai or nomihodai specials – for a fixed price, you get an hour or two to eat or drink as much as you like. Choosing exactly what to eat is easier thanks to well-illustrated menus or plastic food displays at the entrance that Madame Tussaud would be proud of – just point and see what you get.

From a country that survived on a diet of primarily fish and vegetables just over a century ago, Japan has reached the point where there are now several well-known fast food restaurant chains available to choose from. Japanese-style family restaurants (famiresu) often based on the concept of Western chains are also worth a visit.

Unlike their counterparts in the west, family-friendly restaurants in Japan offer great value for money, tasty food, and excellent service. Some of the best known restaurants are Gusto, Coco-ichi (which specializes in Japanese-style curries), and Joyfull (which are mainly found in western Japan). Of course it’s Japan, the restaurants are always spotlessly clean too. For those who love Korean and Chinese food, there are also many options available.