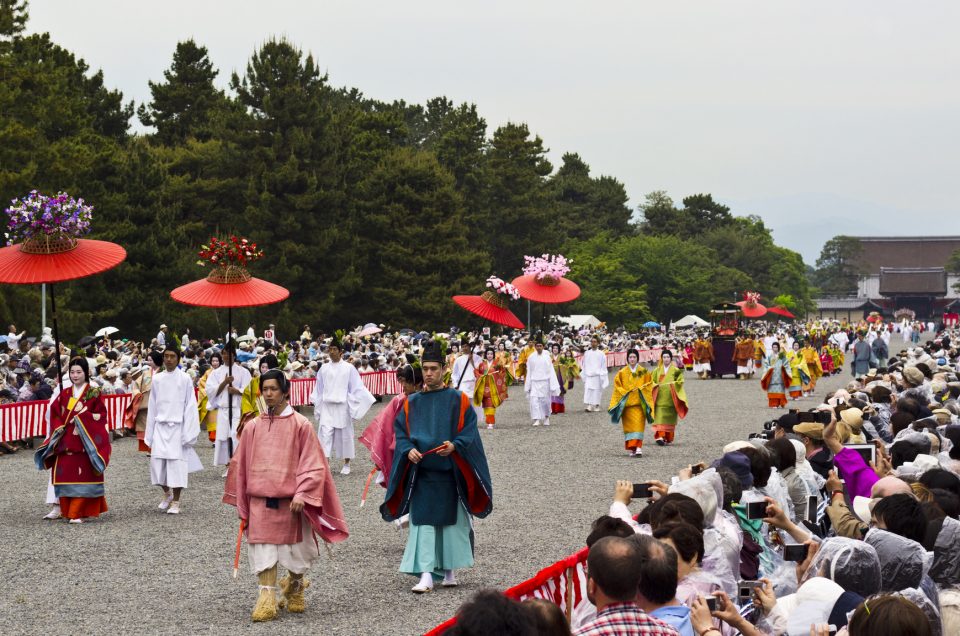 A majestic procession of Kyoto’s inhabitants and animals recreates the delivery of the Emperor’s message to two of Kyoto’s most important shrines.

In mid-May, Kyoto’s beloved Aoi Matsuri (hollyhock festival) comes to life. This is the annual festival of Shimogamo and Kamigamo Shrines. Over 1,000 years old, the highlight of the festival is a 700-meter-long parade depicting the delivery of the Emperor’s message to the two shrines. More than 500 people from Kyoto participate in the parade wearing traditional Japanese costumes and accompanied by cows and horses, all decorated with the motif of the hollyhock, the city’s emblem. The procession leaves the Imperial Palace (where the Emperor used to live until 1869) at 10:30, stopping at the Shimogamo Shrine and finally arriving at the Kamigamo Shrine at 15:30 where dance performances and horse races are held.

Thousands of people line the streets to see this, one of Kyoto’s three main festivals, so go early to get a good spot along the way! Alternatively, InsideJapan can arrange reserved seating for you along the procession route so you don’t have to fight crowds to get a good view.

When to go: The Hollyhock festival will take place on May 15.

Hollyhock Festival
Open Chat
Powered by
Hi, talk with us