Unzen National Park, known for its hot springs, is located on the Shimabara Peninsula, 2 hours from Nagasaki by road. In the center of the park rises Mount Unzen, an active volcano that has several peaks, the most important being […]

Unzen National Park, known for its hot springs, is located on the Shimabara Peninsula, 2 hours from Nagasaki by road. In the center of the park rises Mount Unzen, an active volcano that has several peaks, the most important being Fugen (1,350 m), Myoken (1,334 m) and Nodake (1,147 m). The panoramic view offered by these peaks is especially amazing. Mount Unzen (with a pleasant climate in any season of the year) is even more attractive in the month of May due to the azaleas in bloom, in autumn when the leaves of the trees dress them in purple and in winter because they are covered with snow and ice. 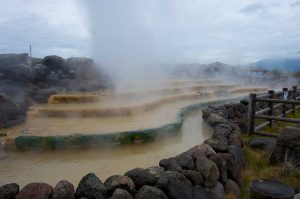 The hot spring has three springs: Furuyu (the old spring), Shin-yu (the new spring) and Kojigoku (the miniature hell). The best time of year to visit it is the summer season. Surrounded by a splendid landscape, it is located at an altitude of 727 m. Its mineral-rich hot water baths are particularly effective in treating certain ailments.

Jigoku Circuit or Circuit of Hell

The Unzen onsen contains more than 30 craters that expel jets of water vapor (solfataras) and fumaroles that also emit water into a pond that is constantly agitated by the heat. The landscape is completely strewn with natural embankments and whitish pellets of earth from which thick clouds of steam emanate. It is difficult to find your way around this lunar landscape.

Between the Myoken and Nodake peaks, the Nita Pass (1080 m altitude) is equipped with a cable car that leads to the top of Myoken. From the top, the view of the entire mountain range is breathtaking.

Mount Fugen erupted in 1990 forming the lava dome of Mount Heisei Shinzan. The spectacular shapes of these new mountains can be seen from the Nita-toge Pass and from the top of Mount Myoken.

In 1990, Mount Fugen erupted causing tremendous material damage and the death of several people, including that of French volcanologists: Katia and Maurice Krafft. Visitors to the memorial will be able to become aware of the destructive fury of which nature can be capable as well as the sagacity and courage that human beings have shown to combat it.

At the foot of Mount Kinugasa, west of the Shin-yu Spring, this pleasant lake offers excellent summer camping on its shores.
5 min on foot from the Unzen bus station.

On the eastern shore of the Tachibana Peninsula and southwest of Mount Unzen, Obama is a favorite hot spring and the access point to the volcanic chain.

On the eastern shore of the Tachibana Peninsula, Shimbara is the port of departure from which you embark for Misumi and Miike. There is also a connection to Kumamoto.

This place is closely linked to the Christian rebellion of 1637. The tower, rebuilt in 1964, offers an exhibition on the history of the Christian people in Japan.

Behind Shimabara Castle, this museum exhibits the works of Seibo Kitamura (1884-1987), the sculptor who made the Nagasaki Park Peace Statue.

It was here that the rebellion of the Christian people who opposed the persecutions they suffered from the Tokugawa shogunat ended in 1637.

Formed in 1792 after the lava eruption of Mount Mayuyama, these pine-clad islands with their white sand beaches draw dashed lines in the turquoise sea west of Shimabara.

Unzen
Open Chat
Powered by
Hi, talk with us