North of Gifu Prefecture, Takayama is an ancient feudal city known for its ancient wooden houses, which, by their alignment and uniform height, give the streets a linear beauty. The city is also famous for its festival, which takes place […]

North of Gifu Prefecture, Takayama is an ancient feudal city known for its ancient wooden houses, which, by their alignment and uniform height, give the streets a linear beauty. The city is also famous for its festival, which takes place every year in spring and fall. It was founded in the 16th century and is one of the three largest and most beautiful festivals in Japan. Resplendent floats travel through the city offering the amazed attendees a sample of the crafts of the region. 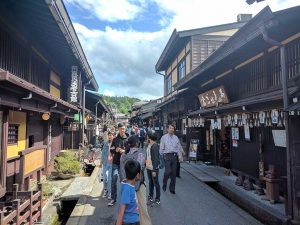 The center of the old city of Takayama is a lively area. The three main streets of San-machi Suji are narrow and lined with traditional product stores, craft workshops, taverns, and breweries (indicated by a ball of cedar spiers hanging outside). There are also many restaurants with local specialties or antique shops specializing in ancient folk arts. Throughout the neighborhood there are a considerable number of small museums, where the buildings are as interesting as the exhibits. Also noteworthy are the hangars where the large floats used for the famous Takayama festival, held in spring and fall, are stored.

Takayama Jinya Miyagawa markets are very popular in Takayama. Every morning, the farmers’ wives from neighboring villages arrive with their fresh produce (vegetables and flowers). The different harvests mark the passing of the seasons in the mountains that surround the city. 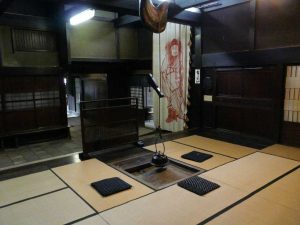 Situated on the banks of the Miyagawa River, this museum is a magnificent example of traditional Takayama architecture. 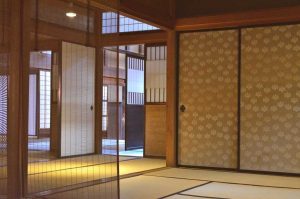 Near the Kusakabe Folk Art Museum is another traditional house, although of a different style, more intimate. Rebuilt in 1908 faithfully respecting the original structure, it offers the best of local craftsmanship applied to a merchant’s house.

Inro, small finely decorated pillboxes, and netsuke, used to hang on the belt, are considered some of the most beautiful pieces of art in Japan. Around 300 rare inro are on display here, as well as screens and lacquers from the Momoyama and Edo periods.

Visitors who cannot be in Takayama for the fall or spring festivals will find four of the eleven large and colorful floats used during the procession here. The floats are considered important cultural assets.

Exhibition of the lion dance ceremony

The dance of the shishi, the mythical lion, is present in many Japanese festivals, especially those in the center and north of the country. Those in the Hida region, near Takayama, are considered especially interesting. In this museum, located in the Sakura-machi neighborhood, more than 800 lion masks are exhibited, as well as drums and other items related to the festivals.

A large collection of Shunkei lacquers, one of the most representative crafts of Takayama. Over 1,000 objects dating from the 17th century to the present day are on display and production techniques are shown.

This museum exhibits a private collection on the popular arts of Japan, China and Korea. The entrance gate was built on the model of the entrance to Takayama Castle.

This museum has a large collection of objects related to the ancient art and traditions of the region. The building is one hundred years old. Among the exhibits are wooden sculptures of Enku, a Buddhist monk who created religious statues in a unique, rustic style, as well as ancient pieces of pottery found during excavations in the region.

It is interesting, both for the exhibits, related to the life of the Takayama merchants, and for its building, a beautiful house built in 1897.

This museum is also interesting for its architecture. Located in the oldest part of the city, San-Suji machi, it was owned by a vassal of Lord Kanamori and features unusual structural details that suggest the presence of ninjas.

Headquarters of the local government when Takayama was under the administration of the Kanamori clan; it is the only building of its kind in Japan. It was built in 1615 and managed by the feudal authorities until the 19th century, when it came under the control of the local government. The current buildings were rebuilt in 1816. Similar to a small-scale palace, these buildings feature thick walls and an imposing portal at the entrance. 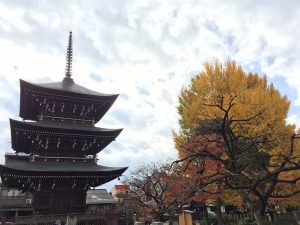 Originally built in 746 by Emperor Shommu as one of the province’s temples dedicated to the nation’s peace, it is the oldest temple in Takayama. But the original temple burned down, and now the oldest building is the main building, which dates back to the 16th century. Among the temple treasures are a precious sword that belonged to the Heike family, and wooden statues from the Heian period depicting Yakushi Nyorai and Kannon.

Overlooking the city, this temple was originally in Shirakawago. It was brought here in 1960 due to the construction of a dam. The main building, dating from 1504, is considered an outstanding example from the Muromachi era, and is said to have been built from a single giant cedar.

The park was created on what was the site of Takayama Castle. The castle was first built here in 1590 by Lord Kanamori, but it was not completed until sixteen years later. You can still see the location of the foundations of the original tower and some walls. The park is famous for its lush vegetation. In spring, cherry blossoms are especially beautiful. From there you can see a magnificent view of the Japanese Alps.

Thirteen temples and five shrines line a tree-lined esplanade. Each temple or shrine is architecturally interesting and contains many beautiful statues and other artistic treasures. Visiting Higashi Teramachi makes it clear why Takayama is known as “little Kyoto.”