The rugged Shiretoko Mountains are a haven of cliffs and waterfalls, as well as a haven for seabirds. The peninsula itself is a national park and some of its forests are said to be virgin and have not yet been […]

The rugged Shiretoko Mountains are a haven of cliffs and waterfalls, as well as a haven for seabirds. The peninsula itself is a national park and some of its forests are said to be virgin and have not yet been explored. The site was declared a World Heritage Site by Unesco in 2005.

Located on the west coast of the Shiretoko Peninsula, Utoro is the ideal starting point for exploring wild places, such as the hot waterfalls of Kamuiwakka or the Five Lakes of Shiretoko. It is a spa town where there are 25 hostels, hotels and minshuku.

These waterfalls are a natural hot spring, coming from the heart of Mount Iou. The waterfalls basin has been transformed into an outdoor onsen. 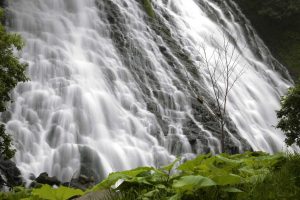 With a height of 80 meters, they are the largest waterfalls in Shiretoko and are among the 100 most beautiful in Japan.

Ship “Aurora” off the coast of Shiretoko

This ship offers a cruise along the cliffs from Utoro to Cape Shiretoko, from which you can enjoy magnificent views only accessible from the sea. 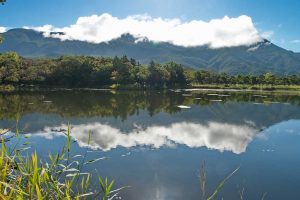 These five lakes are located in a protected virgin forest. The hiking trails allow you to immerse yourself in mysterious landscapes through which the seasons pass.

The port of Rausu is famous for its edible seaweed. It also allows you to savor delicious seafood or the famous king crab. The cross road linking Utoro and Rausu is closed during the winter. Continuing along the road to Cape Shiretoko, you will reach Aidomari and Seseki, two spas with open-air baths in a completely natural environment. Aidomari marks the end of the road that runs along the eastern coast of the peninsula.

Mount Rausu, the highest point of the Shiretoko Peninsula with an altitude of 1,661 meters, is known as “Mount Fuji of Shiretoko”. At the end of July, the mountain plants are in full bloom. From the top, a 360 ° view reaches up to Kunashiri Island.

Shiretoko Peninsula
Open Chat
Powered by
Hi, talk with us