Lake Toya and Lake Shikotsu, both relatively close to Sapporo, are volcanic in origin and their waters rest on ancient craters. Given its origin, and thanks to the telluric activity that is still present, its waters never freeze, which creates […]

Lake Toya and Lake Shikotsu, both relatively close to Sapporo, are volcanic in origin and their waters rest on ancient craters. Given its origin, and thanks to the telluric activity that is still present, its waters never freeze, which creates an absolutely unique ecosystem around its surroundings, and onsen are on its banks, that is, hot springs to relax and enjoy the minerals present in the water. 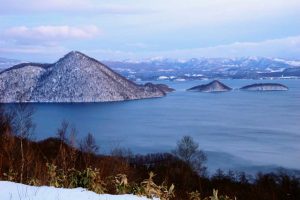 This lake, located in a caldera, is circular and its maximum depth is 180 meters. Fish are plentiful, especially sockeye salmon. The view is magnificent, especially on the four islands called Nakanoshima. The climate in the lake area is generally mild and the water never freezes, allowing the tourist season to extend from April to October. Toyako hot springs (Toyako-onsen) are among the largest and most renowned in Hokkaido. From the crater of Mount Usu, in front of the spa, swirls of smoke emerge. 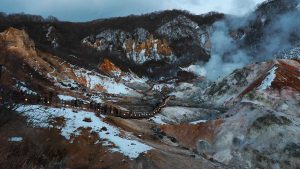 This spa is considered one of the main ones in Japan. At just 200 meters above sea level, it is surrounded by mountains on all sides. Eleven sources particularly rich in sulfur, alum and radium arise from Jigokudani (Hell Valley), the ancient site of volcanic eruptions. Jigokudani is within walking distance from hotels and downtown. The Japanese-style Dai-ichi Takimotokan hotel features a massive 1,600-seat bathroom with seven different fountains.

With a height of 55 meters, this mountain, also called Mount Kuma, can be accessed by cable car from the Noboribetsu spa. At the top is the Noboribetsu Bear Park, home to 160 brown bears.

This restored town is located on the shores of Lake Pororo, where the Ainus lived. To preserve Ainu traditions and culture, the site includes a museum and replicas of their habitat. Tourists can witness the dances, listen to the songs and attend demonstrations of the crafts that the Ainus made. 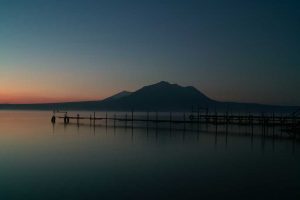 This lake, located in a volcanic caldera, is surrounded by mountain tops, Mount Eniwadake to the north and the Tarumae and Fuppushi mountains to the south, whose magnificent reflections can be seen on the surface. Many activities are offered, such as lake cruises or scuba diving. Four camps, five ryokan, a youth hostel and some minshuku welcome visitors on the east bank. Bicycles can be rented at one of the ryokan. At some distance from there is a famous cave covered with 30 varieties of moss, with a dreamlike beauty.