Nikko, a two-hour train ride from Tokyo, is both a wonder of natural beauty and an important site of Japan’s architectural masterpieces. It has been a UNESCO World Heritage Site since 1999. The Toshogu Shrine, completed in 1636 and dedicated […]

Nikko, a two-hour train ride from Tokyo, is both a wonder of natural beauty and an important site of Japan’s architectural masterpieces. It has been a UNESCO World Heritage Site since 1999. The Toshogu Shrine, completed in 1636 and dedicated to the founder of the Tokugawa shogunate, is the convergence point of the city. Most of the shrine buildings, as well as numerous items, have been listed as National Treasures or valuable cultural heritage.

The Shinkyo Bridge or “Sacred Bridge” stands gracefully over the Daiya River. Lake Chuzenji shines especially in early May, with the blooming of the colorful cherry blossoms and in October, when the leaves put on their autumnal finery. A 5-minute walk from the Chuzenji Onsen bus stop is the Kogen waterfall, one of the most famous in Japan. It is possible to approach it thanks to an elevator. Another 15-minute walk will take you to the Chuzenji Temple, which houses the famous statue of the Goddess with a thousand arms.

The sacred Bridge, completely lacquered in red, forms a graceful arch over the Daiya River. Its refinement contrasts with the wild nature of the throat. Legend has it that the hermit who gave rise to Nikko crossed the river on the back of two snakes, represented today by the bridge. In feudal times, only the emperor had the right to cross the bridge. It leads to a park of 16,000 cedars located near Toshogu.

This monumental gate is lavishly decorated and marks the main access to the Toshogu shrine. It is considered a national treasure. 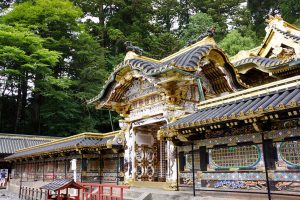 Built in 1636 in memory of Ieyasu, founder of the Tokugawa shogunate, this shrine is Nikko’s main attraction. Unlike other sanctuaries, characterized by a refined architecture that blends with the surrounding landscape, this sanctuary has an exuberance of colors, gold leaf details and sculptures of all kinds. In it is the famous sculpture of the Three monkeys of wisdom (“I do not hear what should not be heard”, “I do not say what should not be said”, “I do not see what should not be seen”), thus like the sleeping cat. Most of the buildings are considered National Treasures of the country or classified as cultural assets. 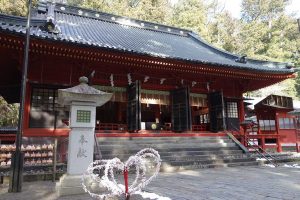 Founded in 767, it is the oldest religious complex in the area. It includes 23 buildings classified as important cultural assets. 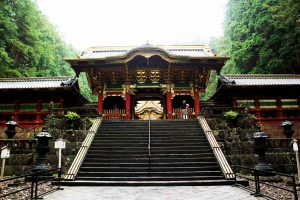 The Taiyuin or Taiyuinbyo mausoleum, dedicated to Iemitsu, the third Tokugawa shogun, always showed great respect for Ieyasu. For this reason the mausoleum was built near the Toshogu shrine, paying homage to the latter’s architecture. 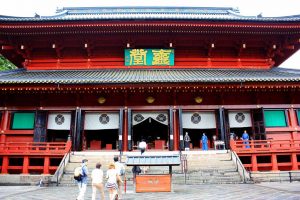 Founded in 766 by the Buddhist monk responsible for Nikko, this temple is a haven of peace in the heart of the mountains. It is famous for its Three Buddhas, statues covered in gold leaf, and its beautiful Japanese meditation garden. 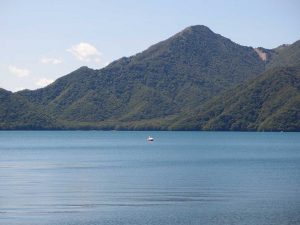 Lake Chuzenji is particularly splendid in early May with its cherry blossoms and in October, surrounded by trees with resplendent foliage. A boat connects the Fune-no-eki jetty (5 minute walk from Chuzenji Onsen bus stop) to Shobugahama in 20 minutes. This service is not insured from December to March.

In this spa there are many restaurants, souvenir shops, hotels and traditional inns. In many hotels you can take baths with volcanic hot springs. 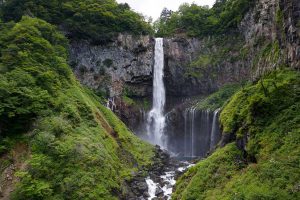 Japan’s most famous waterfalls are a 5-minute walk from Chuzenji Onsen bus stop. An elevator allows access to the top of the waterfalls (530 yen).

Several buildings of this sanctuary founded at the end of the 8th century are classified as cultural assets. A path, open from May 5 to October 25, allows access to the top of Mount Nantai in 3 or 4 hours (2,486 meters of altitude).

The Chuzenji temple or Tachiki Kannon, houses a famous statue of the goddess Kannon, bodhisattva of compassion with the 1,000 arms. 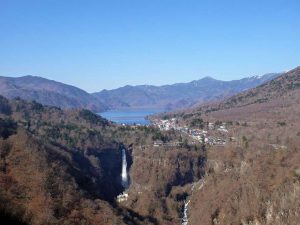 From this lookout, there is a beautiful view of Lake Chuzenji, Kegon Falls, and Mount Nantai.

One of Japan’s most famous hot springs is 1 hour 30 minutes by bus from Nikko Bus Station (or 30-40 minutes by bus from Chuzenji Onsen). This town is surrounded by mountains, except for the southern part that opens onto Lake Yunoko. It has several high standard traditional style hotels. 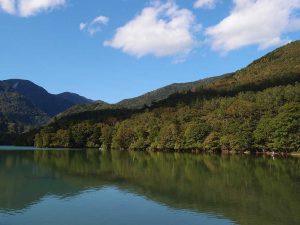 Lake Yunoko is a pleasant place for fishing, sailing, or hiking. The Yudaki Falls, south of the lake, are a pleasant site for hiking. 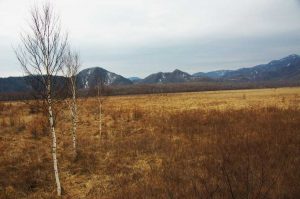 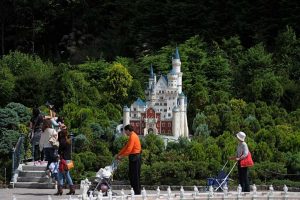 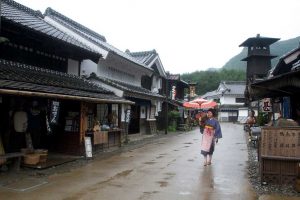