Narita Most visitors set foot in Japan at Narita, where the country’s largest international airport is located. But few know the city, yet it is very popular with the Japanese. Every year, 13 million worshipers flock to the great Naritasan […]

Most visitors set foot in Japan at Narita, where the country’s largest international airport is located. But few know the city, yet it is very popular with the Japanese. Every year, 13 million worshipers flock to the great Naritasan Shinshoji Temple, and major festivals, such as Narita Gion or the Drum Festival, attract large audiences. 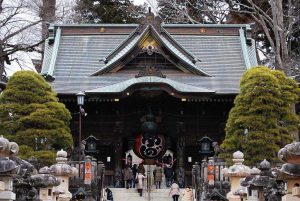 Built in 940 by the great Abbot Kanjo, Naritasan Shinshoji is the main temple of the Chizan school of the Shingon Buddhist sect. It is one of the three great Kanto temples dedicated to Fudomyo-o, the god of fire. The visit to the temple is often accompanied by a walk through the 16.5 hectares of the park that is located behind the main building.

With its official name Maishozan Toshoji, this temple is dedicated to the memory of the victims of the war, during the crushing of the Civil War in Tohoku by Sakanoue-no Tamuramaro under the reign of Emperor Kammu (781-806). Later, it was called Sogo Reido in honor of Kiuchi Sogoro, head of what was then just a town, executed in the seventeenth century with his wife and four children for their opposition to the shogunate and the taxes that fell on its administered. There are two buildings dedicated to him, the Sogo Goichidaikikan, which tells his story through an exhibition of dolls, and the Sogo Reihoden, which displays tourist souvenirs linked to him.

In a 32-hectare park where there are 120 burial mounds (known as Ryukaku-ji Kofun-gun) and pine forests, there is an open-air historical museum, where the auditorium of the old elementary school of the Imperial Academy, declared an Important Cultural Asset. Other buildings from the Edo period and the early Meiji period are also present here, including a farm, a swordsman’s residence serving a samurai, and even a soba noodle factory, where you can see its traditional preparation and also taste them.

It is the only museum in Japan dedicated to historiography, archeology, and folklore. 110,000 objects are preserved here, 8,000 of them in a permanent exhibition. A tour narrates the history and culture of Japan from prehistoric times to modern times. The museum is located in Sakura Joshi Park, famous for its cherry blossoms in spring.

An audiovisual installation helps the visitor to get closer to the region. Different exhibition halls display aspects of Japanese culture and tradition, as well as two floats used in the Narita Gion festival. Every Friday from 10:30 am to 12:00 pm, a tea ceremony is organized in English; There are also workshops “A Taste of Japanese Culture for You”, with demonstrations of ikebana, kimono, calligraphy, origami and koto on the 3rd Tuesday of the month (if the 3rd Monday of the month is a holiday, the workshops are moved to Wednesday) from 10:00 a.m. to 12:00 p.m. and from 1:00 p.m. to 3:00 p.m.

In Naritasan Park you will find the museum dedicated to one of the major Japanese arts. The exhibits range from the Edo period to the present day.

Narita
Open Chat
Powered by
Hi, talk with us