Historically, the city of Nagasaki, located on the west coast of Kyushu, has been an important port and an important center for trade with foreign countries. During the 300-year closure of the country, a period known as sakkoku, it was […]

Historically, the city of Nagasaki, located on the west coast of Kyushu, has been an important port and an important center for trade with foreign countries. During the 300-year closure of the country, a period known as sakkoku, it was the only point of access for Western goods and culture. Due to its history, the city is marked by the influence of miscegenation between eastern and western culture, visible both in the historical remains, as well as in the works of art, crafts or festivals. In addition, the nature that surrounds it is especially beautiful. Today, Nagasaki is a modern city, with a flourishing naval and fishing industry, but it is also known for its crafts closely related to the sea, with cultured pearls, turtle shells or coral.

Monument to the 26 Christian martyrs

In 1962, a memorial was erected to the 6 foreigners and 20 Japanese Christians who were crucified on February 5, 1597, following a decree issued by Army Chief Toyotomi Hideyoshi prohibiting Christianity. 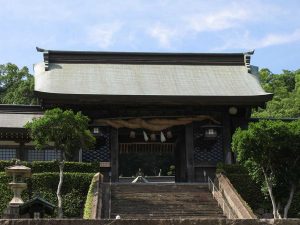 This Shinto shrine located on the top of a hill to the north of the city offers a beautiful panoramic view over the city and the harbor. The tower houses models of unusual Chinese ships. The sanctuary is known for Okunchi, one of the most important festivals in the country.

On the site of the home of the German surgeon who worked in Nagasaki from 1823 to 1829, there is now a museum dedicated to his work introducing European medicine and culture to Japan.

This Buddhist temple was founded in 1620 by a Chinese monk for the Chinese community in Japan. It includes several Chinese-style buildings of great cultural value. 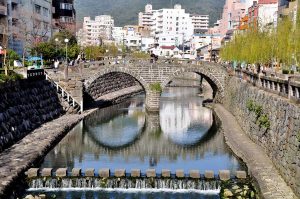 Named for its two arches that are reflected in the water, this bridge was built in 1634 by Nyojo, the Chinese superior of the Kofukuji temple. It is the oldest foreign-style stone bridge built in Japan. It has been listed as an important cultural asset. 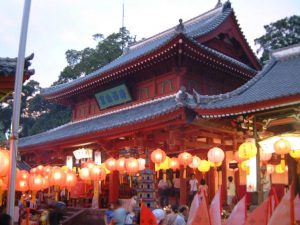 This temple was founded in 1629 by the Chinese monk Chonen. The gate tower and the other buildings are good examples of the Chinese architectural style of the Ming period. The second gate and the main building are classified as National Treasures.

Oranda-Zaka (the coast of the Dutch) 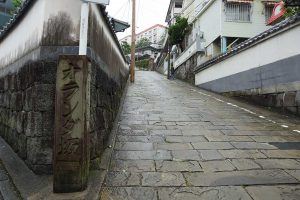 On both sides of this gently sloping street, you can still find the wooden houses built by the Dutch residents established there during the country’s closure period.

The temple was built in 1893 in honor of Confucius by the Chinese who lived in Japan. Next to it is a museum displaying works from temporary exhibitions at the Chinese National Museum and the Forbidden City Museum in Beijing.

Completed in 1865 under the supervision of a French missionary in memory of the 26 Christian martyrs, this church with its beautiful stained glass windows is in the neo-Gothic style. It has been classified as a National Treasure.

Near the Oura Catholic Church, we find several western-style buildings dating from the Meiji period. One of the main houses is that of Thomas Glover, an English merchant who established a trading company here in 1859. The garden is one of the most popular for admiring the bay. 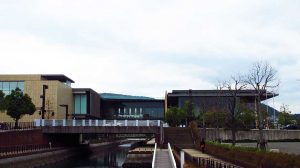 Opened in 2005 in the park located on the Nagasaki Sea, this museum houses a rich collection of Spanish art from the 15th century to Picasso, Miró and Dalí.

Site of the old Dutch factory in Dejima 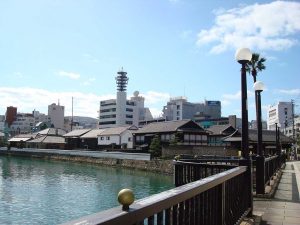 Dejima is a small artificial island built in 1636 to accommodate Europeans and prevent the spread of Christianity. For more than 200 years, Dejima was the only point of contact between Japan and Europe. In this place, a museum has been dedicated to this history.

Nagasaki Museum of History and Culture

A pioneer in international exchange, this museum offers exhibits on Nagasaki’s modern history, works of art, and ancient texts. It also exhibits a reconstruction of the Nagasaki Courthouse during the Edo period.

The cable car will take you to the top of Mount Inasa, at an altitude of 333 meters, the best place to have a view of the city. 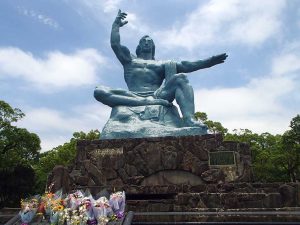 The park was built at the epicenter of the atomic bomb explosion of August 9, 1945.

This museum commemorating the atomic bomb of August 9, 1945 displays scenes from Nagasaki before and after the explosion, so that visitors can appreciate the devastating power of this weapon and reflect on world peace and denuclearization. 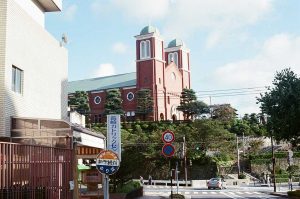 The cathedral, destroyed by the bomb, was rebuilt again. Urakami was a place where Christians met to pray, despite the persecutions of the Tokugawa regime.

Nagasaki
Open Chat
Powered by
Hi, talk with us