The construction of the Zenkoji Temple during the 18th century facilitated the rapid expansion of the city of Nagano thanks to the constant flow of pilgrims. Today, it is a thriving political, economic and cultural hub, the capital of the […]

The construction of the Zenkoji Temple during the 18th century facilitated the rapid expansion of the city of Nagano thanks to the constant flow of pilgrims. Today, it is a thriving political, economic and cultural hub, the capital of the prefecture being the homonymous city of Nagano, internationally famous since it hosted the Winter Olympics in 1998. 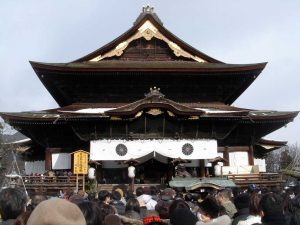 This temple, founded in the 7th century, reached its peak in the 18th century with the construction of the great main building, inscribed on the list of National Treasures. The sacred statue in the temple was a gift from the King of Korea to the Emperor of Japan in 552 but has never been displayed to the public. Even during the great Gokaicho ceremony that takes place once every 7 years what is displayed is a copy of the original. Every morning around 6 a.m., a public religious ceremony known as ‘Ojuzu-Chodai’ takes place during which the temple’s superior representative gently taps the heads of the attendees with his string of beads or juzu to bless them.

The museum exhibits works by artists from the region and the gallery features a collection of works by Kaii Higashiyama, a famous landscape painter.

The Olympic stadium built to host the skating competitions during the 1998 Olympic and Paralympic Winter Games is currently used as an ice skating rink from early October to early March. There you will also find the Nagano Olympic Museum that exhibits the sports equipment of the Olympic athletes who participated in the 1998 Games and has a 3D movie theater and a bobsleigh simulator (a type of sled).

Just 35 minutes by car from Nagano, at the foot of Mount Iizuna there is a plateau that has been declared a national park and that attracts large numbers of Nagano residents who spend the day (or several) there to enjoy nature and the outdoor activities. A little further afield, at 1 h and 10 minutes by car, rises the Togakushi plateau, a region famous for its buckwheat or buckwheat noodles, the so-called Togakushi-soba. If you decide to visit the region, don’t miss the Togakushi Shrine or the Togakushi Botanical Garden. In the surroundings of Kagamiike Lake, hikers will be able to see cherry blossoms in spring, azaleas from late May to early October, and the blazing hues of autumn.

In the Togakushi Hills they can discover and practice the arts of these warriors in the ninja abode, the labyrinth of surprises, the haunted house, the shuriken abode or the ninja forest.

Nagano
Open Chat
Powered by
Hi, talk with us