At 900 meters of altitude, on the top of Mount Koya, located in the almost Koya-Ryujin National Park, is the Kongobu-ji temple, founded in 816 by the monk Kukai (also known by the name of Kobo-Daishi ) and the main […]

At 900 meters of altitude, on the top of Mount Koya, located in the almost Koya-Ryujin National Park, is the Kongobu-ji temple, founded in 816 by the monk Kukai (also known by the name of Kobo-Daishi ) and the main temple of Shingon Buddhism, an esoteric branch of Japanese Buddhism. Since then, 120 temples and monasteries have been installed on the mountain, thus becoming a religious center of the first order. Some of these temples and monasteries offer accommodation for pilgrims and visitors, or vegetarian meals, or also the possibility of initiating the practice of zazen, Zen meditation. The place is classified as a UNESCO World Heritage Site. 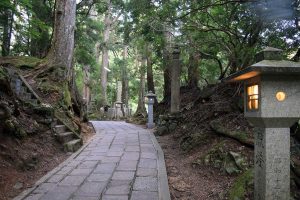 Access to the temple is done on foot along a paved path of 2 kilometers, or 40 minutes, through a forest of cedars, many of them centenary, among which there are more than 200,000 tombs, some more than millenary, funerary monuments and statues of historical figures. Important names in Japanese history can be recognized, such as Toyotomi Hideyoshi or Oda Nobunaga.

Here is the Kukai mausoleum. Beyond the Gobyo-bashi bridge, it is forbidden to take photos, eat, drink or smoke. When crossing the bridge, you should lower your head and put your hands together in prayer, as the belief states that Kukai waits and welcomes visitors at the end of the bridge. The mausoleum is located behind the Temple of Lanterns, illuminated by the glow of 20,000 hanging lanterns 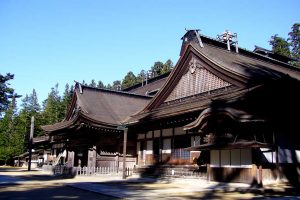 It is the main temple of the 3,600 Shingon temples throughout Japan. Built in 1592, it is famous for its paintings on fusuma (movable partitions), following the style of the Kano school. Banryu-tei Garden is the largest rock garden in Japan. Two dragons made of 140 pieces of blue granite and white sand guard the Okuden (sanctuary). 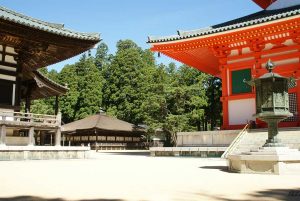 This place is made up of several buildings. The Kondo was built in 819 by Kukai (and rebuilt several times since then) and is the site of important religious ceremonies. El Miedo is recognizable by its roof, of great elegance. The Konpon-Daito is a vermilion lacquered pagoda, almost 50 meters high.

Sacred Sites and Pilgrimage Routes of the Kii Mountains

Mount Koya
Open Chat
Powered by
Hi, talk with us