Aso-Kuju is a national park located between Kumamoto and Oita prefectures, which symbolizes the “land of light”. Around Mount Aso, a still active volcano, there are green meadows, lakes, forests and hot springs used in thermal baths (onsen). Places to […]

Aso-Kuju is a national park located between Kumamoto and Oita prefectures, which symbolizes the “land of light”. Around Mount Aso, a still active volcano, there are green meadows, lakes, forests and hot springs used in thermal baths (onsen).

The chain of volcanoes

Mount Aso is a typical volcanic complex. It groups around fifteen volcanic cones within a caldera of approximately 24 km by 18 km, that is, a circumference of 128 km, which makes it one of the largest in the world. The Naka-dake (1,506 meters high) is the most active of these cones and one of the most active volcanoes in the world. Its summit, saturated with a smell of sulfur, can be accessed by cable car or by car. It is the only place in Japan where tourists can see the black smoke from the volcano from the crater rim. Bunkers were built on the slopes to protect tourists in the event of a small eruption, but of course access is prohibited in the event of a violent eruption.

At 954 meters high, Mount Komezuka is a “parasitic” volcano of Mount Aso. It is covered with grass and, from May on, visitors can admire the green landscape. However, it is forbidden to climb the mountain as it is a protected place. 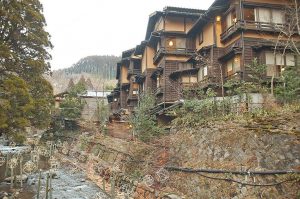 Along the Tanoharu River, there are twenty onsen. Most are outdoors, on the banks, on the rocks in the mountains or in small forests. This spa is one of the most popular in the Kumamoto region.

It is called the “gaseous spa” (ramune onsen) because its fizzy hot springs produce bubbles in the baths.

It is the largest theme park in Kyushu. Here we find hot springs, a ranch, restaurants, a hotel in the form of small domes, sports fields, etc.

In this zoo, 1,100 animals gather, of 95 different species. Shows are organized, mainly with chimpanzees, bears and penguins. You can also feed the animals and touch them.

Monte Aso
Open Chat
Powered by
Hi, talk with us