Myth is today the nerve center of the commercial, economic and cultural sector of the Ibaraki prefecture but the north of the city has preserved the imprint of the feudal past of the town. As you walk through its narrow […]

Myth is today the nerve center of the commercial, economic and cultural sector of the Ibaraki prefecture but the north of the city has preserved the imprint of the feudal past of the town. As you walk through its narrow streets, you will come across iconic and historical places such as the Kodokan school, founded by a powerful clan from the Edo period, or the ruins of the ancient castle. Myth is also home to one of the three most beautiful gardens in Japan, the Kairakuen.

This garden, known as one of the three most beautiful in Japan, is famous for its 3,000 plum trees, which bloom from the end of February to the end of March. The Kobuntei residence, built in 1842, is a true testament to the sophisticated lifestyle of the daimyô (feudal lords) during the Tokugawa shogunat period. (20 min by bus from JR de Mito station)

This museum exhibits the most valuable objects from the collection of 30,000 pieces treasured by the first shogun, Ieyasu Tokugawa and his son Yorifusa. (10 min by taxi from JR de Mito station)

This museum was created in 1974 with the aim of recording the past of the prefecture. (15 min by bus from JR de Mito station)

The «Art Tower» of Mito

This cultural complex is made up of a concert hall, a theater, an art gallery and various shops and restaurants. The 100 meter high lookout tower will allow you to enjoy a magnificent panoramic view of the city. It is possible to hire guided tours in English but they must be booked at least one week in advance (Tel: 029-227-8111). 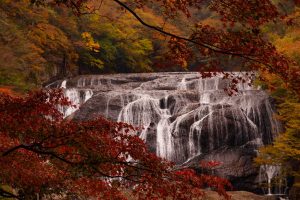 This waterfall is one of the largest waterfalls in Japan. Given that its appearance varies considerably depending on the season of the year, it is also called the «Cascade of the 4 seasons». As you pass through the Kanbaku tunnel, a wonderful view awaits you from the Kanbakudai platform. The region is equally famous for its cockfighting and trout fishing.

The history of Kasama-yaki pottery begins 220 years ago. Always focused on the manufacture of everyday utensils, brown in color and enameled in black, it has been recognized as an integral part of traditional Japanese crafts. You will be able to discover it mainly in the Yakimono-dori (or avenue of ceramics) in the city of Kasama where some workshops offer courses.

Near Oarai Beach stands a 60-meter-high lookout tower from where you can see the Pacific Ocean, Mount Tsukuba and even, if the sky is clear, Mount Fuji. You will also find a restaurant at the top of the tower.

Mito
Open Chat
Powered by
Hi, talk with us