The largest city on the island of Shikoku is a popular destination for its castle and for Dogo Onsen, a hot spring known and used for 3,000 years. But it is also an important city in the Japanese literary world […]

The largest city on the island of Shikoku is a popular destination for its castle and for Dogo Onsen, a hot spring known and used for 3,000 years. But it is also an important city in the Japanese literary world since Masaoka Shiki, the father of modern haiku, and the famous novelist Natsume Sôseki resided there. The latter placed in this city the story of one of his most famous novels, Botchan. In homage to him, Matsuyama built a tram line like the old ones, called the Botchan train, which allows to visit the city in an extremely pleasant way. 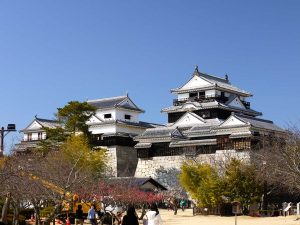 Completed in 1627, Matsuyama Castle was built on a 132 meter high hill. This is one of the few castles in Japan that has been preserved in its original condition, although parts of it were rebuilt in the mid-19th century. From the keep, visitors can enjoy a panoramic view of the city and the islands of the Seto Inland Sea. 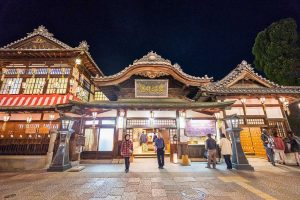 This hot spring is one of the oldest in Japan. The current public bath building is a three-story wooden building built in 1894. There is also a special bath reserved for the imperial family called Yushinden, which is no longer used but can be visited. The entire complex is listed as an important cultural asset. 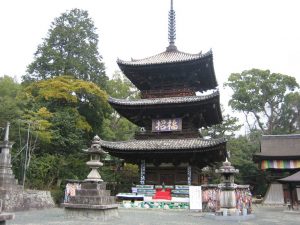 Ishita is the 51st pilgrimage temple of the 88 temples of the Shingon school of Shikoku, known by the name of O-Henro and attended by the faithful, recognizable by their white uniform. Some buildings are national heritage and important cultural assets.

For 230 years, this city has been the most important center for pottery on the island of Shikoku. It has more than 80 ovens and its style is famous for its indigo blue motifs on white porcelain. A collection of classic and contemporary pieces is exhibited in the Tobe-yaki Dento Sangyo Kaikan (or House of the traditional Tobe-yaki industry). Not far away, local works can be purchased at the Tobe-yaki Togeikan (or Tobe-yaki Ceramics Center). 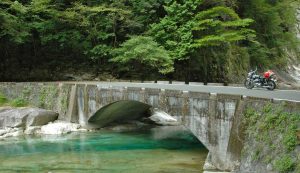 The Omogokei Gorges are a good example of the natural splendor of the island. At the end of these gorge rises Mount Ishizuchi, one of the seven sacred mountains of Japan. Its peaks are the Tengu-dake Peak, which is the highest point of western Japan at 1,982 meters, and the Mi-sen Peak, crowned by the last building of the Ishizuchi Shinto shrine.

From the 17th to the 19th century, the famous Date clan ruled the city and the entire region from the top of their castle. Today, you can visit the castle and the Municipal Museum Date, which exhibits 40,000 objects related to the history of the clan, their costumes, weapons, ceramics, documents, art objects and a precious collection of decorative wedding or garden items. Tensha-en appreciated for its wisteria and its reeds. The city is also famous for its traditional bullfights (January 2nd, April 1st Sunday, July 24th, August 14th and 4th Sunday in October. During the city festival (from 22nd to 24th of July), giant effigies of bulls stroll through the streets.