Also known as the “city of water”, Matsue is situated where Nakaumi Lagoon and Shinji Lake meet. Matsue is an ancient feudal city, capital of the province of Izumo (present-day Shimane Prefecture), a true treasure whose cultural assets and historical […]

Also known as the “city of water”, Matsue is situated where Nakaumi Lagoon and Shinji Lake meet. Matsue is an ancient feudal city, capital of the province of Izumo (present-day Shimane Prefecture), a true treasure whose cultural assets and historical places are closely related to the myths and legends of ancient Japan. The city is also known to foreigners and English learners as the place where Lafcadio Hearn (1850-1904) lived, author of numerous books on Japan and one of the first foreigners to naturalize, adopting the name Yakumo Koizumi. 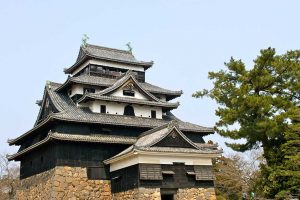 A symbol of the city, this castle built in 1611 is more of an excellent example of a defensive fortress than a manor house. The five-story keep, which was rebuilt in 1642, offers excellent views of the surrounding area, especially Lake Shinji and Mount Daisen. Part of the castle grounds is made up of Jozan Park. 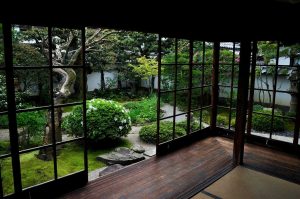 The famous writer and “transmitter” between Japan and the West lived 15 months in Matsue as an English teacher at the city’s high school. He gave an account of his impressions of the city in his essay “In a Japanese Garden”, included in the book “Glimpses on Unfamiliar Japan” (Glances at an unknown Japan). The museum has a large collection of manuscripts and objects by the author that evoke his life in Japan.

The house where Lafcadio Hearn lived

Lafcadio Hearn spent 7 months in this house, which has not undergone any change since his departure from Matsue.

This museum exhibits numerous objects related to the tea ceremony, such as pottery> Rakuzanyaki and Fujinayaki, calligraphy, paintings and antiques. Sometimes prints made by local artists are shown.

This preserved samurai house features objects representative of the daily life of a samurai family in the Edo era.

It is a perfectly preserved tea house, built according to the Irimoya-zukuri architectural style. It was originally built by the feudal lord Fumai Matsudaira of the Matsue clan, a respectable master of the tea ceremony, which he held in the garden of the residence of one of his vassals. It was transferred to its current location on the 150th anniversary of his death. Under the Hyakuso-tei bower, you can have tea for 400 yen. 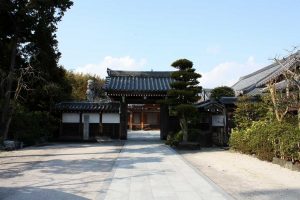 In the temple is the mausoleum where all the generations of the Matsudaira family rest, which is surrounded by stone lanterns. The entrance door to the mausoleum is a beautiful example of the architecture of this type of construction. The Treasury Room contains the swords of the lords and their belongings.

Here you can see and buy crafts, ceramics and typical gastronomy of the prefecture.

This onsen contains calcium sulfate, effective against rheumatism, skin diseases and other diseases. But it is equally effective when it comes to relaxing. The public baths are called Tamatsukuri Spa Yuuyu. Another of the typical things of the city is blue agate.

This museum is famous for its large Japanese garden and its collection of modern Japanese painting, including that of Taikan Yokoyama, a famous 20th century painter. In the ceramics room, works by the main ceramic artists of today are exhibited.

Considered one of the 100 lighthouses of great historical value in the world, it was built from a French model. Due to its location, at the end of the Shimane Peninsula, it offers impressive views over the Sea of ​​Japan.

This park is famous for its panoramic view of Mount Daisen and Oki Island.

A cruise aboard these traditional Japanese “gondolas” will give you the opportunity to visit the city and its most important tourist attractions in an original way.