Capital of the prefecture of the same name, Kumamoto was a very prosperous manor city from the early 17th to the late 19th centuries. The Shirakawa River and its tributaries run through it and surround the castle, which is located […]

Capital of the prefecture of the same name, Kumamoto was a very prosperous manor city from the early 17th to the late 19th centuries. The Shirakawa River and its tributaries run through it and surround the castle, which is located in the center of the city. In addition, Kumamoto was nicknamed “the city of wood and fresh water” for its canals and its many gardens. 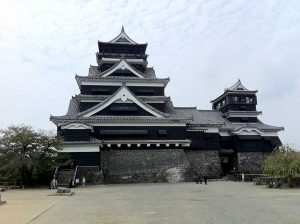 A symbol of the city and one of the three most beautiful castles in Japan, Kumamoto Castle rises on a hill. It was built in 1607 under the direction of Kiyomasa Kato, the local lord who laid the foundations for the current structure of the city. A large part of the castle burned down during a fire in 1877, but the keep was restored in 1960, recovering its original splendor. The keep is today a museum where valuable objects from the Shogun period are exhibited. 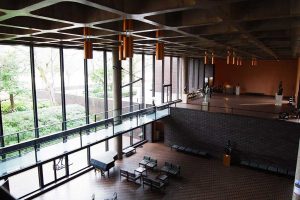 Located in the park of the Ninomaru Castle, this museum features works ranging from ancient times to the present, both Japanese and Western. You can also see old engravings, sculptures and calligraphy, as well as works by Renoir, Rembrandt, Gauguin, Picasso or Rodin. Likewise, it is possible to admire the reproductions of the magnificent decorated tombs discovered in the prefecture. 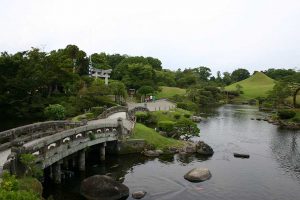 It is a typical Momoyama style garden created in 1632 in a residence of the Hosokawa clan, leaders of the region who succeeded the Kato clan. The 64.6 hectare garden is unique in its design and reproduces on a large scale such famous landscapes as the ancient Tokaido road or Mount Fuji and Lake Biwa. There is also a tea room, originally located in Kyoto’s famous Ratsura Rikyu Garden.

The center exhibits a great variety of handicrafts and folk art in wood, ceramics, bamboo, as well as cutlery or marquetry in the Higo style, specific to the Kumamoto region. Some pieces are for sale in the store.

Miyamoto Musashi, the great swordmaster of the 17th century, spent the end of his life in Kumamoto. In this cave, he meditated and wrote the famous “Treatise on the five wheels” (Gorin no Sho), which describes the philosophy of the art of the sword, military strategies, and life behavior.

This museum exhibits objects related to the history of the samurai culture of the Kumamoto region. His masterpieces are the weapons and objects that belonged to Miyamoto Musashi, as well as his calligraphies.

Kumamoto
Open Chat
Powered by
Hi, talk with us