Located in the vicinity of Tokyo, Kashima has long been an important stopover on the shipping lanes that continue their journey in the direction of the Pacific Ocean. However, the city is known above all for its sanctuary dedicated to […]

Located in the vicinity of Tokyo, Kashima has long been an important stopover on the shipping lanes that continue their journey in the direction of the Pacific Ocean. However, the city is known above all for its sanctuary dedicated to martial arts, specifically kenjutsu. Neighboring Itako is a very pleasant lake city to go for a boat ride in June and thus admire the Festival of the Lilies. It is located in the Suigo-Tsukuba Park (practically national). 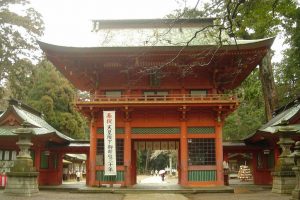 It is one of the three largest Shinto shrines in eastern Japan and one of the oldest. Legend has it that its foundation dates back to 660 BC, even if it probably dates more accurately to the fourth century. The shrine is dedicated to Takemikazuchi-no-mikoto, one of the gods of martial arts. This sanctuary is considered as the cradle of several schools that have marked the art of handling the saber: kenjutsu and kendô. The trees surrounding the sanctuary are estimated to be 1,200 years old. The building has been declared an Asset of Cultural Importance. In the Treasury Room, more than 300 objects of great cultural and historical value are exhibited, such as a large number of sabers, among which one dates from the 5th century.

Visit the port of Kashima

There are organized tours of the port by boat on weekends and during holidays. The mini cruise lasts 45 minutes.

Some 7,000 wild rose bushes bloom in the park located by the sea between the months of May and June. A 45 meter high lookout tower will allow you to enjoy a 360 ° view of the region and the ocean. Several attractions await you in the area: a planetarium, a museum of local history, a gallery and an imposing 154-meter long slide.

This is the home stadium of the famous “Kashima Antlers” team, professionals of the J League. Matches were played here during the 2002 Soccer World Cup.

Enclosed between the Hitachi-Tone River and Lake Kitaura, Itako is a veritable network of channels through which it is possible to navigate aboard traditional boats, the sappa bune. Touring the entire city in sappa bune passing through its 12 bridges receives the nickname Maekawa-junikyo Meguri in Japanese. In early summer, this promenade is lined with millions of lilies (more than 500 different varieties) that bloom throughout the city on the occasion of the Suigo Itako Ayame Festival, mainly in three gardens: Maekawa, Hitachi-tonegawa and Sengenshita (free entry) .