Kamakura is located one hour by train from Tokyo. It is a small coastal city dotted with temples with a quiet atmosphere. Due to the presence of the feudal government, which took possession of its neighborhoods in 1192, it preserves […]

Kamakura is located one hour by train from Tokyo. It is a small coastal city dotted with temples with a quiet atmosphere. Due to the presence of the feudal government, which took possession of its neighborhoods in 1192, it preserves today a historical heritage of the utmost importance. The best way to discover Kamakura is to do it on your own. The 5 main famous temples take the wanderer back to the 12th century, in the middle of the Kamakura period.

The Engakuji Temple was built in 1282 to commemorate the deaths of the Japanese and Mongolian soldiers who perished during the Mongol invasion of Japan. The Kenchoji Temple, built in 1253, is of Chinese inspiration. Tsurugaoka Hachimangu Shrine is located near Kamakura Station. The “Hongu” or main building of the shrine opens to a magnificent view of the city of Kamakura. The Kamakura National Treasures Museum houses more than 2,000 treasures from the Kamakura temples and changes the exhibits every month. But, of course, it is the bronze Great Buddha that attracts the most visitors to Kamakura. The Hasedara Temple, famous for its main wooden building and magnificent Japanese-style garden, reigns supreme over the entire city. Enoshima Island, a small island 4 km in perimeter, floats delicately in Sagami Bay.

Founded in the 13th century, it is the second among the great Zen temples of Kamakura. It houses a famous wooden statue of the Buddha, and its bell is declared a National Treasure. Access to the temple is very spectacular, with its staircase flanked by large cedars.

Number one of the five great Zen temples in Kamakura, it was also the first to be built in this city.

With more than 9 million visitors a year, the Hachimangu Tsurugaoka Shrine is the symbol of the ancient capital. The shrine was founded by Minamoto Yoritoshi, ancestor of the shogun Minamoto Yoritomo, founder of the Kamakura feudal government, which ruled Japan from 1192 to 1333.

The museum brings together important works of art linked to Kamakura’s rich history, including five national treasures. The main building, built after the great earthquake of 1923, is inspired by the Shoso-in Temple in Nara. 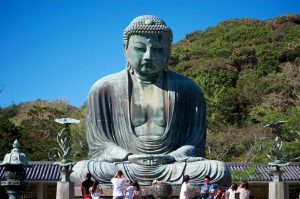 The Great Buddha or “Daibutsu” is a giant statue of 11.4 meters high and 122 tons, which meditates in the lotus position, under the celestial vault. It is made of bronze plaques mounted on a hollow structure and you can enter the monument. It was completed in 1252 thanks to Minamoto Yoritomo to compete with the Buddha of Nara who, at that time, was more imposing. 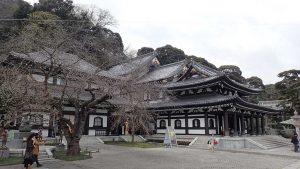 The central element of the Hasedera Temple is Juichimen Kannon, a wooden statue of the bodhisattva Kannon with 11 faces. At 9.18 meters, it is the largest wooden statue in Japan.