45 km from Niigata, in the Sea of ​​Japan, the island of Sado is a great enjoyment for lovers of nature and hiking, thanks to its rugged and beautiful coastline, its two mountain ranges and its central plain. But Sado […]

45 km from Niigata, in the Sea of ​​Japan, the island of Sado is a great enjoyment for lovers of nature and hiking, thanks to its rugged and beautiful coastline, its two mountain ranges and its central plain. But Sado is also a historical and cultural destination. In the Middle Ages it was a place of exile to which many intellectuals hostile to the government were exiled, which contributed to the development of a local aristocratic culture, highlighting a true passion for the No that still persists today. In the Edo period (17th to 19th centuries), a gold mine was discovered on the island, which caused an authentic avalanche of people that would forever mark the landscape. But if Sado is famous throughout the world today, it is because of the taiko drums or Japanese drums. Different specific sets have been created, such as the Odenko, a traditional show that revolves around the taiko with characters dressed as demons. Each town has developed its own style and the best shows are presented during festivals. 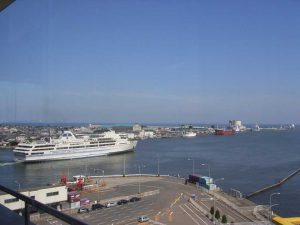 Ryotsu is usually the entry point to the island and a starting point for the Sado visit. This large city is also a dynamic tourist complex with numerous hotels and ryokan. Yebisu is the liveliest area, full of bars and restaurants.

In the past it was a freshwater lake, although today it contains seawater due to a canal being drilled in 1903. Shiizaki Park, on the eastern shore, is a popular walking spot with beautiful views. to the lake, in which Mount Kimpoku is reflected.

Ryotsu-onsen is made up of two thermal centers. Sumiyoshi station is old, but it was not exploited as a tourist destination until 1969. The fountain is especially recommended against neuralgia, rheumatism and fatigue. Located on the coast, it is also a popular seaside resort. Shiizaki Station in Suwa Park is quite recent. It has a beautiful view of Lake Kamo and the mountains.

From the top of Mount Donden, one of the most popular destinations for island walks, there is a splendid view over Ryotus Bay, Lake Kamo and the rice fields of the plain. Also, on clear days, the main island of Honshu can be seen. The summit is a plateau covered with wild flowers in season and where camping is allowed.

Until 1601, it was a town of a dozen houses. But in that year a vein of gold was discovered and the population increased to 100,000. The Tokugawa shogunate put the city under their direct control. The exploitation lasted until 1867. Today, this city of 10,000 inhabitants is a tourist destination in which the vestiges of the exploitation of gold remain. Taking a walk through the gold mine, you pass several temples built in the time of the gold rush. Chomyoji Temple is the oldest. After a few minutes on foot you will reach the upper part of the city, where there is a large bell, and 50 steps on the right is the Mizukaemushuku-no-haka cemetery where the miners are buried. From there you have a magnificent view of Dooyu-no-wareto, the old mine carved by human hands. The many tunnels on its sides form an impressive landscape.

This museum is dedicated to objects related to mining. 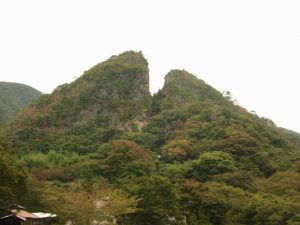 The Sodayu-Ko mine, the most profitable at the time of exploitation, is open to the public. Animated mannequins mimic the working conditions of the time. In the Edo period, many people who came here seeking work and homeless were sent to evacuate the water from the mine. After the Meiji Restoration in 1868, the mine returned to the Imperial House, before being transferred to the Mitsubishi group in 1896. Today it produces 10,000 tons of gold and silver annually.

For 2 km between Tassha and Ageshima the most beautiful coast of Sado offers a wild landscape of cliffs eroded by the sea. From Tassha, a sea excursion to Senkaku-wan Yuen Park is offered from April to mid-November.

The park is connected to Ageshima Island by a 54-meter bridge. An observatory at the top of the island offers a magnificent view of the coastal landscape, with its rock formations, its cliffs and its white sand beaches. In the park there is also an aquarium and seafood restaurants.