Ise-Shima National Park is known mainly for its Shinto shrines, the most respected in all of Japan, and for its “pearl farms”. But you can also admire beautiful natural landscapes, especially on the coast, which is extremely jagged, dotted along […]

Ise-Shima National Park is known mainly for its Shinto shrines, the most respected in all of Japan, and for its “pearl farms”. But you can also admire beautiful natural landscapes, especially on the coast, which is extremely jagged, dotted along its entire length by islands and estuaries that extend into the interior of the earth.

In fact, the Ise Shrine is made up of two parts, located 6 km apart, the Kotaijingu or Naiku and the Toyouke or Geku.

Geku, located in the same city of Ise, is dedicated to Toyouke Omikami, the goddess of agriculture, harvest, food and sericulture. It was founded 1,500 years ago. The buildings of this sanctuary are appreciated mainly for their simplicity and purity, synonymous with beauty here.

Naiku is dedicated to Amaterasu Omikami, the goddess of the sun, considered as the ancestral deity of the imperial family. Naiku’s main buildings, first erected 2,000 years ago, are considered to represent the oldest architecture in Japan. 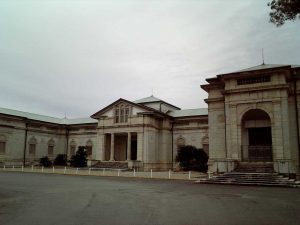 This museum displays liturgical objects and treasures originally offered to the gods, which were replaced when the shrine, according to traditional rites, was rebuilt at the end of the Meiji era and at the beginning of the Showa era. 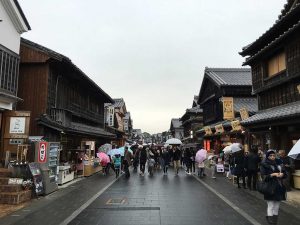 Oharaimachi is a replica of a city from the Edo era, a period when the pilgrimage to the Ise Jingu Shrine was very popular. The streets are lined with traditional shops, tea houses, various stalls, restaurants, as well as souvenir shops selling wooden toys or lacquered plates.

Machikado Museum (on the corner) of the city of Ise

This original concept aims to open 27 centers throughout the city, shops or private homes, in order to present private collections of local toys from the Ise region, carved wooden sculptures (or Ichii-Itto Bori) or pearls, among others. 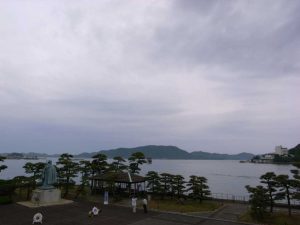 On this small island in the Toba port of Kokichi Mikimoto (1858-1954), cultured pearls were produced for the first time in the world. A museum displays pearl jewelry and artwork and organizes oyster fishing demonstrations by Ama divers.

Near Mikimoto Pearl Island we find one of the largest aquariums in Japan. 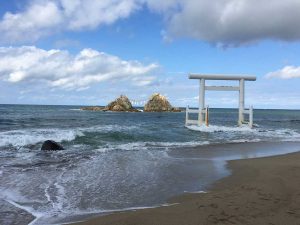 Two rocks in the sea, Meoto-Iwa or the married rocks, represent Izanagi and Izanami, the creator gods of Japan according to Japanese mythology. These rocks are linked by a shimenawa, a braided rice straw rope that delimits a sacred space in the Shinto religion. The view of the sunrise between these two rocks is particularly beautiful.

Kashikojima Island and Ago Bay are considered as one of the most beautiful places in Ise-Shima National Park. In addition, numerous banks of cultured pearls allow you to admire the work of the ama divers.

This reconstruction, identical to that of a town from the time of the Warring Kingdoms, allows the visitor to walk through an imitation of the Azuchi castle, a reproduction made according to the latest historical research, by the Rakuichi Rakuza, or merchants’ neighborhood, visit five theaters and see numerous historical scenes and museums. Thus, you will be able to get an idea of ​​Japan in the time of the civil war. Theatrical performances are also organized.