Himeji is known mainly for its castle, one of the most beautiful in Japan, which offers the appearance and undoubtedly the beauty of a white heron spreading its wings. Considered the most beautiful castle in the country, it is one […]

Himeji is known mainly for its castle, one of the most beautiful in Japan, which offers the appearance and undoubtedly the beauty of a white heron spreading its wings. Considered the most beautiful castle in the country, it is one of the rarest, having escaped fires, earthquakes and the ravages of war. Its whiteness echoes the black castle of Okayama located 50 kilometers away. 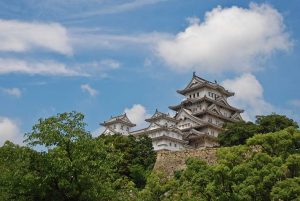 Originally built in the 14th century and rebuilt in the 17th century, Himeji Castle is not only beautiful, but also a rare display of Japan’s original castles. For this reason it has been listed as a World Heritage Site by Unesco. The complex consists of five levels of the main tower and three smaller towers that present a splendid line, both from an aesthetic and architectural point of view. The castle receives the nickname of Hakujoro or Castle of the white heron because of the similarity it shows, from a distance, to one of these birds elegantly perched on the plain. Many movies have been shot in this beautiful setting, including “Shogun” and “Kagemusha”, so perhaps Himeji Castle is already familiar to you.

Himeji Castle is under restoration from October 2009 to March 2015. Depending on the process,
some parts of the castle are closed to the public. From spring 2011, visitors will be able to observe the repair process inside the covered structure.
For more information, visit the site: http://translate.city.himeji.lg.jp/. 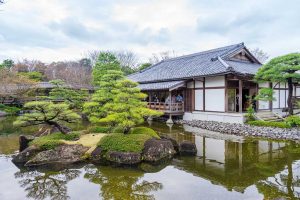 Nine traditional Japanese gardens can be visited on the site of the former Himeji lord’s mansion and the houses of the samurai, who were his vassals.

In a brick building that housed an infantry barracks at the beginning of the 20th century, you can see today a collection of Belgian surrealist paintings, by artists such as René Magritte and Paul Delvaux.

This museum displays objects and documents related to the history of Hyogo Prefecture and Himeji Castle.

From anywhere in the city you can see the great 38-meter stupa on top of the hill on which the Nagoyama Cemetery sits. The interior is magnificent. It also offers a beautiful view of the city from any point. 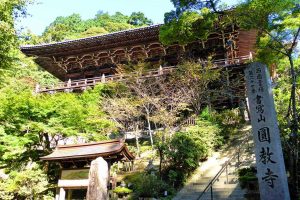 This temple has belonged to the Tendai school of Buddhism for more than 1,000 years. It is made up of three magnificent buildings and, among its numerous statues, many are listed as Cultural Asset. The visitor can also note that some scenes from the movie “The Last Samurai” were shot here.

It is a community building and shopping center located near Himeji Station, lined with restaurants and shops. Interesting architecture and beautiful view from the 4th floor viewing deck.

Himeji
Open Chat
Powered by
Hi, talk with us