Hokkaido’s third largest city, with 292,000 inhabitants. It fans out from the foot of Mount Hakodate to the sandbar in the northeast of the Hakodate Peninsula. Here you can see the trams that run through the city as in the […]

Hokkaido’s third largest city, with 292,000 inhabitants. It fans out from the foot of Mount Hakodate to the sandbar in the northeast of the Hakodate Peninsula. Here you can see the trams that run through the city as in the past. Hakodate is a flourishing port and gateway to the island of Hokkaido. Hakodate can be reached from the island of Honshu via the underwater railway tunnel, by ferry or by plane. Hakodate received a strong cultural influence from exchanges with the West. It is one of the first ports, along with Yokohama and Kobe, to open to international trade in 1859. Tourists can enjoy its many foreign buildings, including churches concentrated in the Motomachi area. You can also enjoy the morning market (Asa ichi), which takes place once a week near Hakodate station. 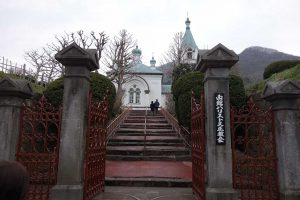 The Russian Orthodox Church is located 2 kilometers southwest of Hakodate Station. The Byzantine-style church was rebuilt on its current site in 1916, after the original building was destroyed in a fire.

Goryokaku Fortress was the first to be built in the European style. It was concluded in 1864 after 7 years of work. The building is shaped like a star. Goryokaku Park is also famous for its beautiful 1,660 cherry trees. From the observatory, at the top of the Goryokaku Tower (90 meters high) located inside the park, you can enjoy a general view of the park and its surroundings. 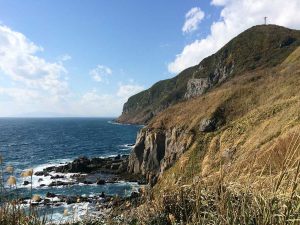 Cape Tachimachi is famous for its panoramic views and rugged cliffs at the foot of Mount Hakodate.

On the seashore, it is a giant hot spring that can accommodate 600 people.

The oldest hot spring in Hokkaido. A peaceful atmosphere reigns in the city, despite its 30 ryokan (traditional Japanese-style lodge) situated on both banks of the Matsukura River, which runs through the city to flow into the Tsugaru Strait.

Founded in 1898. Today it houses within its walls about 65 sisters consecrated to a life of devotion and prayer. Visitors are allowed on the perimeter of the red brick building adorned with lovely flower pots.

Small town located north of Hakodate, gateway to the seminal park of Onuma, in Nanae Cho, which has three lakes at the foot of Mount Komagatake, whose eruption has caused the lakes. There are many places to camp on the shores of the lakes and numerous hiking trails. The two main lakes, Lake Onuma and Lake Konuma, separated by a road and a railroad track, originally formed a single lake.

Nanae is located on the Oshima Peninsula and is known for its Onuma National Park. Nanae cho was the first exchange place with foreigners from Hokkaido. Within the community, its inhabitants participate very actively in various cultural activities, such as traditional Japanese taiko writing, theater and drumming.

Hakodate
Open Chat
Powered by
Hi, talk with us