Open on one side to the Inland Sea and attached to the Tsurumi and Yufu Mountains on the other, Beppu is famous throughout Japan for its many onsen (hot springs of volcanic origin). There are around 3,000 onsen with extremely […]

Open on one side to the Inland Sea and attached to the Tsurumi and Yufu Mountains on the other, Beppu is famous throughout Japan for its many onsen (hot springs of volcanic origin). There are around 3,000 onsen with extremely varied chemical properties and they produce more than 100,000 liters of water a day, engulfing the city in a cloud of mist. Some can only be admired, as they are too hot or stuffy, but it is possible to get started in the pleasures and benefits of these onsen in the many public baths or hotels. Inside, the Usuki Stone Buddhas, classified as National Treasures, are not to be missed.

Visitors should not miss these “Hells” (Jigoku). The largest is Umi Jigoku (or “the hell of the sea”), so called because of its blue color and because the water comes out from 200 meters deep at 98 ° C (you can cook eggs). Chi-no-ike Jigoku (or “blood hell”) owes its name to the red color of the clay. Tatsumaki Jigoku (or “hell tornado”), a powerful geyser, rises into the sky. You can sign up for the Jigaku Meguri, a visit to these bubbling wells that spit mud and mineral water. 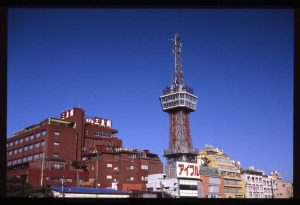 In this 100 meter high television repeater, a panoramic observatory at 60 meters is installed that offers a beautiful view of the city.

A 10 minute walk from Beppu station.

At the foot of Mount Takasaki (628 meters), in the forest, live more than 1,700 Japanese monkeys that can be observed in some facilities. 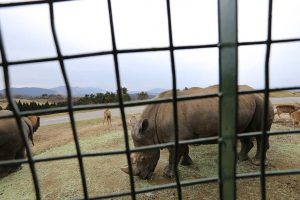 On the Ajimu plateau, there is the largest animal park in Asia: 1,300 animals, among which there are bears, lions, giraffes, elephants or zebras. People who do not have a car can visit the park in a “Jungle Bus”.

On the banks of the Yufu River and at the foot of Mount Yufu is a spa that has a dozen onsen, with numerous ryokan and minshuku, as well as museums, art galleries, restaurants and sophisticated cafes. Nearby, Mount Yufu is reflected in the warm waters of Lake Kinrin, enveloping the landscape in dreamlike steam.

Usuki was a fortified city and a port that maintained commercial relations with Portugal in the 16th century. But Usuki is mostly known for Usuki-no-Sekibutsu, where you can admire more than 60 rock-carved Buddha statues (classified as a National Treasure) located in the Mangetsuji Temple.

Beppu
Open Chat
Powered by
Hi, talk with us