Former feudal city, Aizu-Wakamatsu is one of the main cities in Fukushima Prefecture. Much of the city burned down during the Boshin Civil War of 1868, when the Aizu clan, supporting the Tokugawa shogunate, fought against the imperial factions. The […]

Former feudal city, Aizu-Wakamatsu is one of the main cities in Fukushima Prefecture. Much of the city burned down during the Boshin Civil War of 1868, when the Aizu clan, supporting the Tokugawa shogunate, fought against the imperial factions. The clan was defeated, but the battle contributed to the reputation of the city. However, today we find the feudal atmosphere in the narrow winding streets, historic buildings and stone warehouses. Aizu-Wakamatsu is also a starting point for visiting the Kitakata, Ura-Bandai and Inawashiro regions. 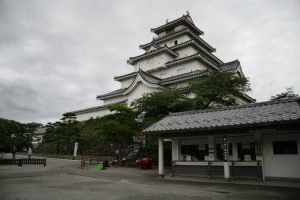 Built 600 years ago and destroyed during the Boshin civil war, the castle was rebuilt and now houses a history museum. In its park there are hundreds of cherry trees that bloom every spring in April. The moats and stone walls are all that remains of the original construction. 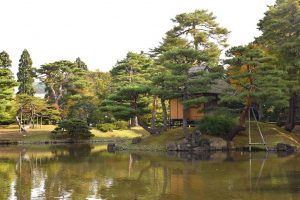 On the site of what was once a village of the Aizu clan, a garden with pleasant ponds, rustic tea trees and a medicinal herb garden especially famous for its cultivation of ginseng was built.

It was built near Tsurugajo Castle in 1986, and exhibits historical objects and cultural assets found in the region. Visitors can try on the traditional peasant dress and play with traditional dolls. 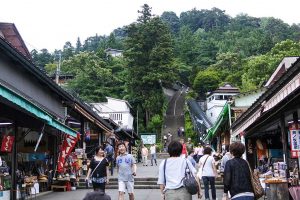 In this area are buried the Byakkotai, a group of young warriors who died tragically defending Tsurugajo Castle during the Boshin civil war. At the foot of the hill there is a museum where his memorabilia and objects are exhibited. 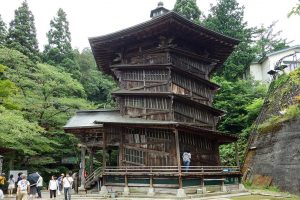 The wooden tower of this Buddhist temple has a helical architecture unique in Japan due to a double revolution staircase. The building is listed as a cultural asset.

North of Tsurugajo Castle, this museum displays the technique used to make sake. You can also see the Aizu Meihokan collection of art objects.

This museum is interesting for its antiques and its tea-related objects.

The replica of the residence of the main vassal of the Aizu clan, at the end of the Tokugawa shogunate, immerses the visitor in the atmosphere of the daily life of a samurai. Antique weapons and furniture are on display and brought to life by mannequins. 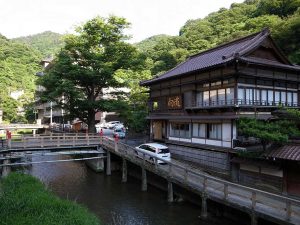 A perfect place to relax quietly in an old ryokan on the riverbank.

It is an open-air history museum located in an old school built by the Aizu clan in 1803. In this school, known for its high level of education, martial arts classes were regularly taught in addition to general education. Today, tourists can experience Japanese archery and soak up the method that was used to train the Byakkotai.

Aizu Hongo is the oldest pottery city in the Tohoku region. There are 16 kilns and visitors can experience pottery or porcelain making in 14 of them. The Aizu Hongo workshops supplied Aizu-Wakamatsu with tiles and tableware.

The museum presents the history of ceramics in the city.

Exhibition and sale of products from the different ovens in the city.

A small spa at the bottom of the valley.

Aizu
Open Chat
Powered by
Hi, talk with us