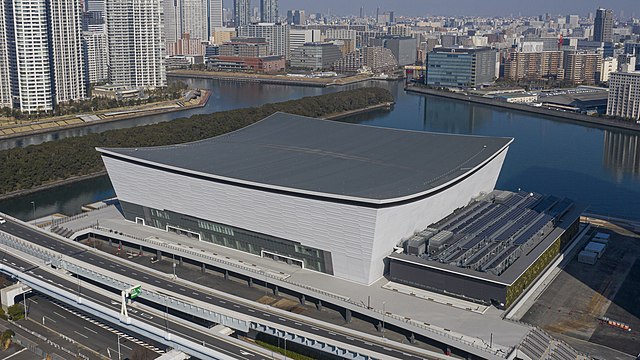 The Ariake Arena (Japanese: 有 明 ア リ ー ナ and Spanish: Ariake Arena) is a multi-sports stadium located in the district of Ariake, Japan. It was built for the 2021 Tokyo Olympic Games where it will host the men’s and women’s volleyball tournaments. In addition, it will host wheelchair basketball during the Paralympic Games.1 Once the Games are over, the stadium will be used for sporting and cultural events.

The Ariake Arena was one of six permanent facilities designed to be built in the Ariake district to host the Olympic and Paralympic Games.2

Its construction began in March 2016 and ended on December 9, 2019.3 The total cost of the project was 37 trillion yen (about $ 340 million). The stadium has a capacity for 15,000 spectators.4 5 The official opening of the Ariake Arena took place on February 2, 2020 at an event attended by the Governor of Tokyo, Yuriko Koike, the Minister of the Olympic Games and Paralympians, Seiko Hashimoto and the president of the Japanese Olympic committee, Yasuhiro Yamashita.

Ariake Arena
Open Chat
Powered by
Hi, talk with us