4 Amazing Things About Japan You Can Enjoy From A Wheelchair

Japan also looks incredible from two wheels and in this post we tell you 4 things you can do if you move on them:

Japan has enacted a law to guarantee access in many parts of the country. In addition to this, there is a rapidly aging population, so there are many older people with mobility needs and a disposable income who love to travel – a boost for any tourist site!

Many of Japan’s tourist attractions are cultural heritage sites, so attention should be paid to integrating accessibility features with the aesthetics of the site. Sometimes a site may seem inaccessible, when it is actually fine. Maintaining both aesthetics and accessibility may mean entering through a not-so-obvious side entrance, but most of the time it will come in the form of a ramp made of aged wood or an elevator designed to look like a temple building. Since many of these integrations aren’t immediately obvious, before you give up, be sure to consult a staff member or security guard. They will gladly show you the way.

Unfortunately, although most places have done a fantastic job, many ancient temples and shrines are built at the top of the stairs on the steep hills and cannot be adapted. 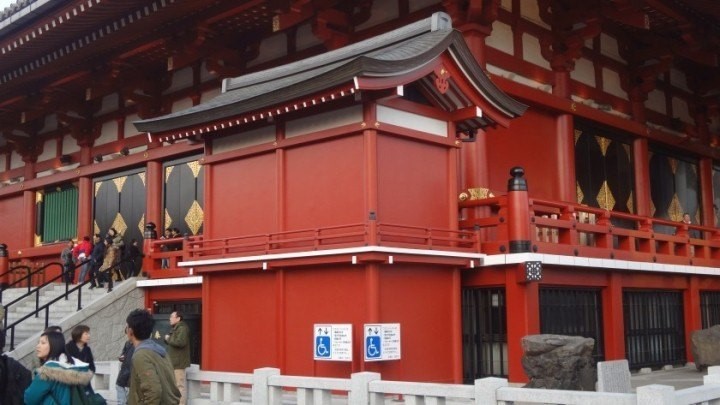 Here, the elevator at Senso-ji in Tokyo is designed to integrate with the temple.

Watching the confusion of Tokyo’s train lines can make you freak out, but here’s a secret – it’s actually easier if you have a disability. You don’t need to follow signs in underground mazes if you have a physical disability! After purchasing your ticket, tell the staff member at the ticket door where you want to go and then wait while they make arrangements. They will call your destination ahead of time (including transfers along the way) and then a member of staff will direct you to the track. After assisting you on the train with a portable slope, you can rest easy knowing that another member of staff will be waiting to help you get off the train at the other end. 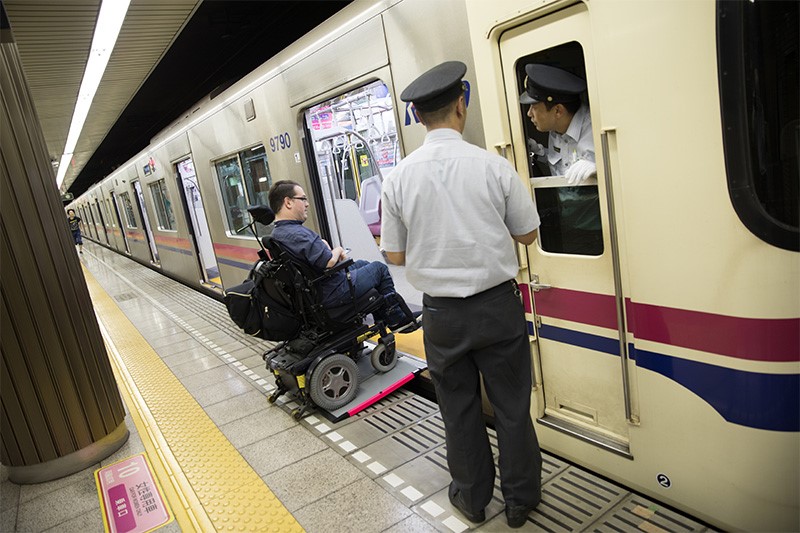 Japan has what is called a “multipurpose toilet”, and they are a boon for wheelchair users.
These extra wide and accessible toilets are a completely separate room located near or just inside the men’s and women’s toilets. They are designed not only for people with disabilities, but also for older people and mothers with young children. As such, they come equipped with handrails, diaper changing table, baby chair, sinks for cleaning ostomy bags, as well as emergency call buttons.
They can also be easily found in train stations, tourist attractions, public buildings, department stores, larger supermarkets, and in parks. Inside Japan Tours can provide you with a pocket WiFi device so you can use the Check a Toilet app when you travel. 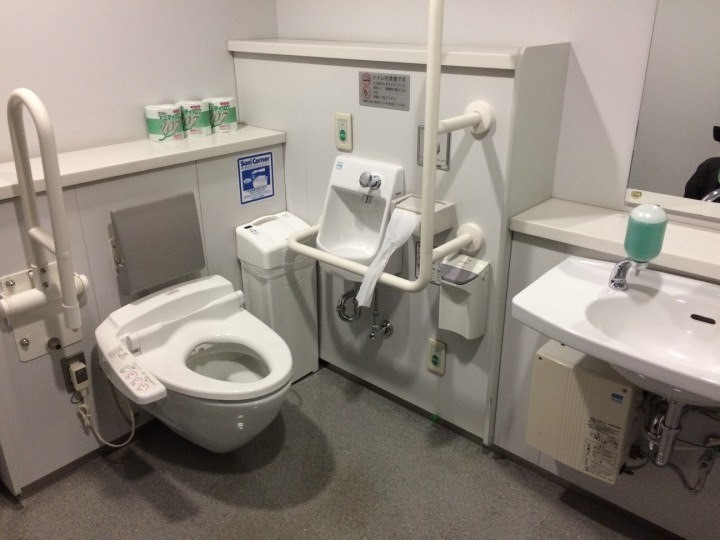 4) A surprising number of accessible hotels!

When you search the Internet for an “affordable hotel” and find nothing, don’t worry. The first problem is that in Japan wheelchair accessible rooms are called “barrier free” or “universal”, not “accessible”. The second challenge is that many websites only include these rooms on the Japanese website. I’m not sure why. Maybe they don’t believe that people with disabilities travel abroad?

Rooms can vary from large and hospitable to rooms where the only adaptation is a handrail next to the bathtub. There are some great rooms on this spectrum, but since there is no defined standard, there are also some not so great ones. Roll-up showers are very rare, but since most bathrooms are waterproof units, a shower chair can be used next to the tub. Japan tours travel, will verify all the details with the hotel, as it is important not to make assumptions.

Unfortunately, ryokan (Japanese-style inns) are mostly inaccessible. Some are accessible and available for seniors, but the tatami areas and bathroom area are often out of reach of wheelchairs.

Preparations are in full swing for the 2020 Olympic and Paralympic Games, which means that everything is becoming even more accessible! So why don’t you come to Japan? It is easier than you think.

4 Amazing Things About Japan You Can Enjoy From A Wheelchair